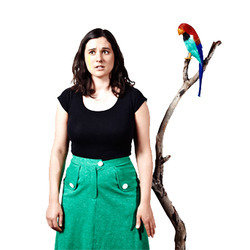 While this West Australian play is described as being a black comedy about suicide, I found a lot of suicide but very little comedy. The few comic moments during the show were like tiny lights in a sea of darkness, doing little but giving the darkness more power, especially as the comic moments seemed more to do with the manic part of a manic depressive cycle.

Minnie (Gita Bezard) and Mona (Arielle Gray) are friends. They play imagination games. I couldn’t tell how old they were meant to be (most of the games were very childish, apart from the sex/dating ones) or why they were trapped together (perhaps two aspects of one personality inside a person’s head?). The play also has them breaking the fourth wall to talk to us as the writer (Jeff) and director (Katt) of the show, telling us their stories of how their friends killed themselves. The audience is invited to leave at any time if they feel uncomfortable (no-one did).

This is definitely not a show for people looking to have a laugh at the concept of death, or finding answers to how to cope with the loss of a loved one. I’m not really sure who the play is aimed at, unless there are people who enjoy watching other people breaking down? It was well written and acted but I was not the target audience in any way shape or form.

Minnie and Mona Play Dead is on at Underbelly, Bristo Square at 2.00pm