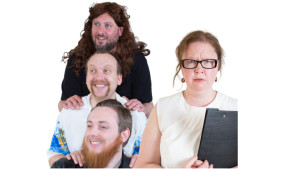 In 2117 the world has managed to come together to alleviate global warming, provide food, shelter and healthcare for all and generally promote harmony all over the globe…that is except for Australia. It has become a wasteland ruled by four factions: The Collingwood Football Club, Retake Australia, Queensland and the Silent Majority. Can the Global Alliance bring these Neanderthals into line?

This comedic play staged by The Mooks (Chris Cole, Matt O’Rouke, Lara Robertson and Greg Tantala) is a wonderful satire of modern Australian culture, ideology and politics. Using Robertson’s Global Alliance delegate, we get a hilarious anthropological study of each of the factions. Nathan Spacca the Collingwood FC legend (O’Rourke) provides plenty of laughs about our obsession with sport and celebrity. Bolt Hanson (Tantala) the sleazy Gold Coast developer lampoons the extreme right-wing folk. Rory the Reclaimer (Syme) explores the brainwashed masses scared of anything foreign.

The staging has been well realised with props aplenty (mostly eskies and tinnies) and elaborate costuming that use every cliché in the book. Audio visual elements add some exposition and a few amusing songs are included to break up the action.

Robertson is a little stilted in her delivery but plays the straight woman well. She is able ramp up the comedic frustration in dealing with these dimwits and can sure belt out an emotional tune when she steps into the spotlight. The other three play their caricatures perfectly, with lots of primal grunting, silly lines and generally hamming it up. O’Rourke’s Spacca is the perfect boofhead who’s full of narcissistic facts and not much more, Tantala is a brilliant combination of smarminess and ignorance, and Syme expertly portrays some comical bravado and a bit of vulnerability.

Boganocracy is a witty piece of theatre that brings up plenty of issues in Australian society. It primarily preaches to the choir but is certainly cartoonish enough to make anyone laugh at these larger than life specimens of Aussie malehood.