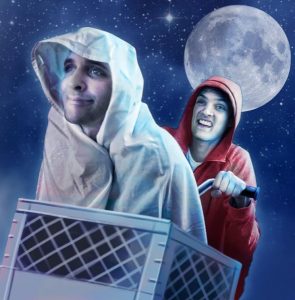 The Game Boys are brothers Eden and Joshua Porter and this is their fifth original show together. It is not surprising that they’ve garnered a swag of award nominations, including one for The Golden Gibbo earlier this year for Cinematic Universe at the Melbourne International Comedy Festival. They run their festival show like a well-oiled machine. It’s hilariously funny and highly polished with some improvised audience participation for added danger and surprises.

Eden and Josh welcome us to their fictional Studio Back Lot Tour as Damo and Mark, identically dressed with Theme Park logo polo shirts. The logos that appear throughout are part of the details that are really impressive. They drop the characters  early on, but I’m glad they don’t let them go. Alternating between characters and themselves throughout. Other characters they play include Angela Bishop & Richard Wilkins doing their own version of Entertainment Tonight on the Red carpet.

Cinematic Universe not only shows a love of films and joy of theme parks but also laughs at the ridiculousness of the film industry with clever use of video montages. We learn how many Air Bud/Buddies movies there are (a LOT) and which movie copycats earned the most at the box office (ie. we have to guess between ANTZ & A Bug’s Life). They are also very enthusiastic about, and pay tribute to another theme park satire Jurassic Park. So there is a bit of a Theme Park satire within a Theme Park satire going on which is deliciously meta. There is also a tribute to the lamest of Theme Park shows – such as the Police Academy Stunt Show at Movie World on the Gold Coast. The Game Boys spin on this is very silly.

There is a lot of audience participation in the show, from the undemanding – the audience pretending they are on a Back Lot Tour – to dragging someone on stage. I’m not a fan of extreme audience participation, but having a lot of Fringey performer types in the audience helps this go pretty smoothly. Getting an audience member doing foley sound effects for them goes on way too long though it does showcase their excellent mime skills. The thing that really wows the audience is the technical design which is just remarkable and the tech guy does a stunning job at carrying it all off.

The Game Boys are very much about popular culture, with a nerdy edge and they bounce around enthusiastically with almost too much energy for a rather late night show. Some parts of this production are so sharp and slick that it feels more like choreography than comedy, reminiscent of Aunty Donna or even the Umbilical Brothers. Their content has a wide appeal and they are extremely good at what they do. The packed audience loves them and I can see them performing to very large audiences in the future. See this brilliant, hilarious show while they are in a smaller venue and you can say I saw them when….

Game Boys Cinematic Universe is on at Trades Hall until September 29
https://melbournefringe.com.au/event/game-boys-cinematic-universe/ 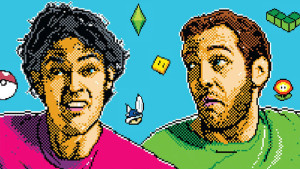 Children of the nineties Eden and Joshua Porter bring us this wonderful look at their love affair with video games. They also throw in plenty of pop culture from their childhood that will have you laughing through all the nostalgia.

The whole show is based upon the audience helping the brothers to complete all the levels in a hexed video game to reach their final goal and escape. They have come up with wonderful ways to involve us including some projectile work that must be an insurer’s nightmare. There are some witty improvising around audience responses but this heavily scripted storyline requires them to keep us on a short leash (just like those “open world“ games that guide you along a single path…but that’s a rant for another time).

Eden and Josh have so many creatively amusing ideas and have thrown everything and the kitchen sink at this show. Liberal use of game animation and sound effects as punchlines? Check! Lots of crazy props? They’ve got ‘em! Wonderfully hammy acting and silly costumes bringing your favourite characters to life? You bet! Their techie must be commended for nailing the plethora of video and audio cues required in this simultaneously high-tech and low-fi production. Highly polished videos and painted cardboard boxes create an immersive game world in which the audience are emotionally invested.

This show is clearly aimed at a particular demographic (I certainly felt old at times) but if you were born before or after these brothers, fear not. Their wacky portrayals of various cultural artefacts provide plenty of chuckles, regardless of your familiarity with them. Even those who don’t game will find lots to laugh at as the Porters mug their way through the quest, throw themselves around the stage, comically bicker and act their little socks off with great comic timing. This manic romp through their personal history of games is an exhilarating and hilarious ride. 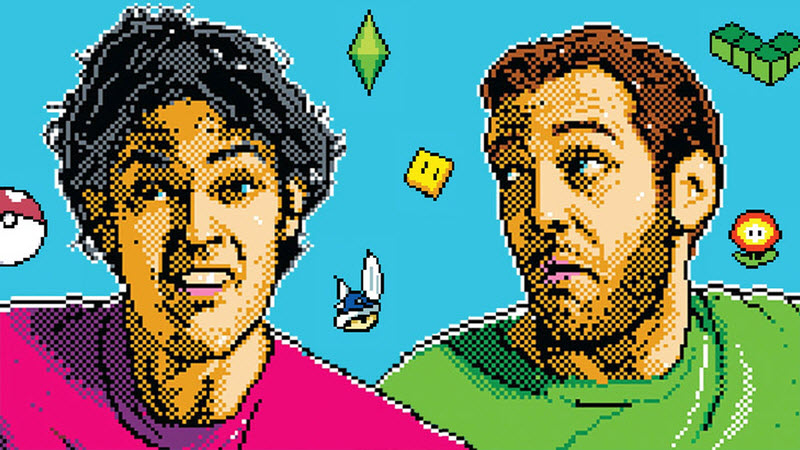 1. You’ve played more video games than you realise – You’ll enjoy it whether you’re a gamer or not. But lets be honest, there’s no one reading this who hasn’t played Tetris or The Sims.

2. The Sims – If you delighted in torturing your sims by locking them in a room as they busted to go to the toilet then prepare to torture Eden live on stage.

3. Nostalgia – Take a stroll through your old save games as they navigate growing up in the 90s with Cheez TV, slap bands and crying when you lose a game of NBA Jam. ‘Member NBA Jam? And Doom, if you’ve wanted to be a Pinky Demon from Doom then don’t miss out.

4. High fidelity graphics – The show looks crisp running in 4k at a stable 60fps with HDR, it looks so realistic it’s almost like you’re in the room with them.

5. Mario Kart – Recreated live on stage. For real. If you’ve ever wanted to throw a green shell at Luigi (or Josh) then this is your chance.

Game Boys: Free to Play is on at Tuxedo Cat from September 29 to October 1