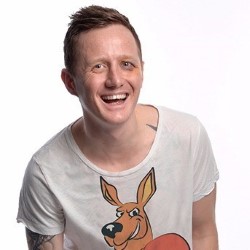 This is a beautifully heart-warming and uplifting homage from Kai to his family and friends, and the influences they have had on his life. He introduces us, via a projector / display screen, to both his grandfathers and his big brother, telling both good and bad tales about them.

Kai tells us about his experience setting up a comedy club in his town of Blyth (just next to Newcastle) and what can possibly happen when you use the first image on google for your club’s logo.  The biggest part of the show, and the one that will probably have most audience members shedding a little tear, is a perfect demonstration of what can happen when a community comes together to help a sick child.

Kai is an excellent storyteller who is not afraid to reveal embarrassing secrets about his past. There are some very funny video moments during the show (I especially loved the one at the very end of the show). The show is selling out, deservedly so, and is a must-see for anyone who would love to see an hour of personal and positive comic tales. Do yourself a favour and see this wonderful show.

Punch-Drunk is on at Gilded Balloon Teviot until August 28 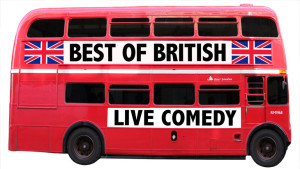 It’s here at the festival again. The maddest silliest most anarchic group of randon comedians acting out a cinematic blockbuster that they, and possibly you, haven’t seen. Last year I saw Aliens and Back To The Future II. This time I was lucky enough to see a film that I had not seen on the big screen (nor, apparently, had the cast or most of the audience – it appears to have been popular only with people without a sense of humour?), AVATAR.

The board out the front of the venue told us that the cast for today consisted of Yianni Agisiliaou, Kai Humphries, Milo McCabe, Steve Bugeja, Stephen Bailey, Elf Lyons and Will Seaward. I know Elf hadn’t turned up (having seen her an hour earlier) and someone else was a no-show as there were only five “stars”. I’d try and give the plot of the film but, if you’ve seen it, you know it better than I do and, if you haven’t, you wouldn’t believe me…. although they kept referring to Fern Gully and there was something about plugging hair into trees and jumping onto flying lizards and floating rocks. the cast dragged a couple of young lads out of the front row (yes the audience WILL be part of the action, so get your acting boots on or hide down the back) to play their avatars. We had to be trees and make jungle noises and stuff, there was a lot of running round the little room and much hilarity was had by all.

If you get a chance to see it, or you would like to see one of your favourite films butchered beyond belief by a bunch of (slightly tipsy) comedians, then this is the choice you have for the rest of the festival: