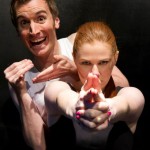 Robert Lloyd is a veteran of the festival circuit with shows such as Who, Me. and  A Study in Scarlet (A Study of…) . as well as his many shows with The Hounds crew and a chat/sketch show on Channel 31 called Live on Bowen. His comedy cred is pretty established and here, yet again proves that he knows how to entertain an audience. The second half of the show is performed by impressive newcomer Kelsey Gade. With his previous protégé Tegan Higginbotham of The Hounds out of the nest in her own successful festival show, Robert has found another talented young lady to work with.

Doing a violent action film in the style of the formal historical comedy Pride and Prejudice is the sort of wonderful silly idea usually thrown at performers in an impro show. Here Robert and Kelsey have taken the idea, run with it and developed it into a full blown romp of a show that plays around with other ideas but impressively never strays too far from its primary premise.

Some of the more fun ideas include the conceit that Kelsey is a last minute fill-in performer (who’s surprisingly good), using the Pride and Prejudice bimbos Kitty and Liddy to provide plot exposition, an appearance by a character from Harry Potter, a big fight scene performed in a Regency dance style and a big fun finale that I won’t give away.

I must stress that although this is very entertaining in a general way it is highly recommended that you have seen Die Hard first. A little knowledge of Pride and Prejudice would not go astray in enhancing your enjoyment either. As a Jane Austen fan who has never seen Die Hard I became a bit confused about the plot and characters and keenly felt the fact that I was missing out on a lot of the jokes the others in the audience were laughing at. Some were explained later, but it was too late for me. The Die Hard fans definitely had a whale of a time and ignorance of Pride and Prejudice wasn’t a huge problem for them. As a history buff I was also annoyed by the modern technology used by characters early on, but this was later rectified somewhat as the show morphed from a Die Hard spoof into more of a Pride and Prejudice hybrid.

This was a deceptively simple looking production with no costumes or props. The energy was obviously poured into the intelligent script, delightful mime and other performance skills, as well as the excellent sound and lighting. It did become a bit confusing with only two performers having to create so many characters, often with different names and styles for the same character, but as I pointed out that may have had something to with my ignorance of Die Hard, which is my own fault. Robert and Kelsey have created a pretty impressive achievement none the less and it’s certainly a lot of fun.

The last performance of Pride Hard is tonight (Oct 13)

This year for Melbourne Fringe Rob Lloyd (Who, Me and Ch 31’s Live on Bowen) is teaming up with new, up and comer Kelsey Gade to present the 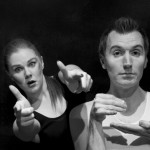 1. This is a completely different approach to the ‘mash-up’ format! I’ve done enough scenes, sketches and whole shows where we take something ‘classical’ and do a ‘modernized’ version of it, either through the genres of action, sci-fi or stuff like that. I wanted to take a risk this year and see if I could pull off a ‘modern’ story on a ‘classical’ style! It’s been great working with both Kelsey and Scott Gooding on this show.

2. All the characters are so great…it’s been so much fun throwing them all ‘into the pot’ as it were and seeing how they play together! From ‘wise guy’ hero John McClane to the ultimate suave bad guy Hans Gruber! From the creepy Mr Collins, the over the top hysterics of Mrs Bennet to the silly, giddy Kitty and Lydia. Two worlds really collide…but also somehow weirdly work.

3. You don’t have to be a Die Hard fan or a Pride and Prejudice lover to like the show…the story and the characters speak for themselves. Plus there are enough other pop culture references; from Harry Potter, South Park, Dr Who, Star Wars and the Disney movies to keep you interested!

4. It’s an extremely high energy show! Trying to cram a two hour film, a 367 page book and roughly 20 characters into under an hour takes quite a lot of stamina. On top of all that, the show is just two actors on stage creating the entire world with their bodies, voices and interactions. You won’t see this type of stuff on ‘The Shire’.

5. Basically it’s a show with everything: love, drama, comedy, action, dance, song…plus two performers in singlets…what more could you want in a Melbourne Fringe show?

Pride Hard is running til the 13th of Oct at The Meeting Room. North Melbourne Town Hall.
Tuesday to Staurday at 8pm. Sundays at 7pm.

To buy tickets go to: http://www.melbournefringe.com.au/fringe-festival/show/pride-hard/

Or for more information about the show go to: http://pridehard.com.au/