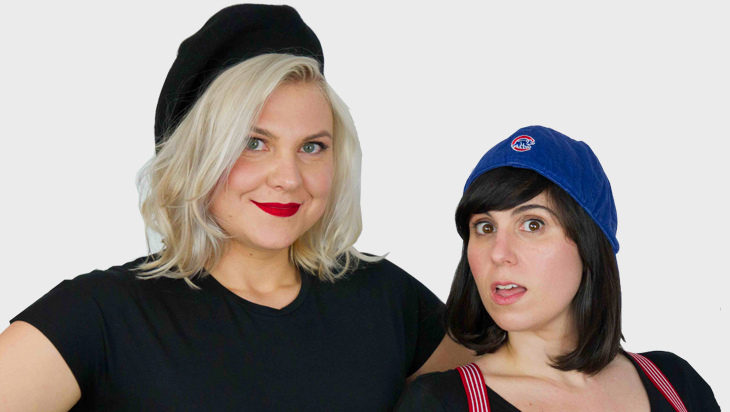 First off, tell me a little about your show for this year, This Is An Excuse.

This is our first comedy festival, and we wanted to find our voice. We wanted to make a show that spoke to women, which was equal parts silly and smart. We’ve put on stage the things we always talk about with our friends but have never seen in a comedy show.

What’s your earliest experience of making people laugh or entertaining? Was it at school, putting on shows for family, etc.?
Hadid: I would say definitely at home. Everyone in my family is funny and with a dark sense of humour. They’re a tough crowd, my grandmother especially; she’s a tough bitch so making her laugh has been reassuring.

Hayward: I always hoped I was funny (I still do). I was a gangly oversized only child with Hollywood dreams and a penchant for Jim Carrey and Ben Stiller movies, but I wasn’t funny yet. Through serendipity and osmosis (and good training) I think I’ve become funnier in my 20’s –away from my parents’ disapproving eye.

Was comedy always the dream? If not, how did you find your way to comedy?

Hadid: Writing has been the dream and Comedy is where I often find myself.

Hayward: Comedy was always the dream, comedy and an unlikely friendship with Tina Fey.

Who or what inspires you in comedy? Do you have a preferred type of comedy you like to watch (eg. standup, sitcoms, movies, etc.)?

We love satirical comedy, with a dark twist, but can’t deny our love for a dick joke. We’ve loved watching The Characters (Netflix), Broad City, and Bob’s Burgers.

Tell me a bit about your creative process. Do you write a lot? Do you do it alone? Do you only write when you’re inspired or do you have a disciplined schedule like a Jerry Seinfeld?

For us the creative equation is COMEDY = FOOD + LAPTOPS. All we do is eat, gossip and write. We’re our funniest with a full mouth.

Do you prefer to be immaculately rehearsed or are you very loose and ad-lib-by on stage?

Hadid: on the loose side.

Hayward and Hadid: happy together

If it’s not too painful to think about, what’s the most awkward experience you’ve had on stage? What did you learn from it, and how do you get past a weak night?
We took our show to Adelaide to workshop it in front of a crowd, and boy did we learn some lessons. On our opening night we had four (uninvited, anonymous) reviewers in the audience, and both of our computers crashed 5 minutes before show time. We pushed on (read: flailed) with no tech, had a front row walk out and were heckled by Siri chiming in from an audience member’s phone.

We were crying between changes backstage because it was such a disaster. To make things worse, we had a review in The Advertiser the next day: “In comedy, timing is everything, and the sometimes lengthy pregnant pauses between “costume changes” meant any momentum quickly evaporated”. No shit dickhead, “costume changes” took too long because we were sobbing silently backstage! We learnt to always triple-check our backups, and that nothing can stop us.

What are you proudest of in your career so far?

We’re proudest of our show right now. Since Adel-geddon, we rewrote, refined and reworked the show and we are super proud (and we couldn’t have done it if we hadn’t learned the hard lessons). Our audiences have loved it, and we’ve had so much fun putting it on every night. Not a single tear shed back stage.

Is there anyone at MICF this year that you really want to check out?

Well we’re right at the end of the festival, but we’ve seen so many awesome shows. Of course, everything at our venue, The Improv Conspiracy; it was a treat to see some hilarious and deliciously weird comedy at Feeble Minds (Zanzoop/Sam Campbell) and we were absolutely blown away by Butt Kapinski (Deanna Fleysher) – completely different to us, but totally inspiring.

What’s been the biggest surprise of your career so far?

Selling out half of our run at our first MICF show has been surprising and pretty special.

One piece of advice you’d give to someone starting out?

Be nice: everyone is trying their hardest and probably not getting paid.

Be brave: the hardest nights show you what you’re made of, and will definitely pay off.

Be rebellious: not everything has to follow the rule of threes 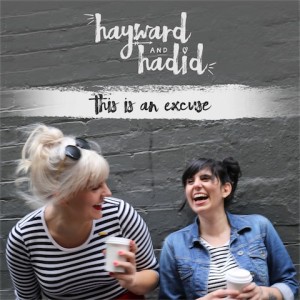 Hayward and Hadid’s debut show This Is An Excuse made me think about a lot of things, but perhaps most of all it made me appreciate the beauty of Melbourne’s Comedy Festival. Here is a form of democracy worthy of close study by our politicians, a place where you can see the bona fide A-listers of comedy, as well as its weirdest emerging voices. If it’s the indie, beautiful-work-in-progress side of MICF that you appreciate most, look no further than Lauren Hayward and Francis Hadid. They’re a couple of platonic lovebirds who met through improv and have created their first scripted show. There’s glimmers of Saturday Night Live in This Is An Excuse, with an hour-long sketch format held together by a central story of Cupid Francis versus Psyche Lauren in a battle for a young couple’s future. Cupid and Psyche’s real-life counterparts even open the show in true SNL style, with a wise-cracking monologue that immediately introduces the audience to the endearing chemistry that shines throughout the hour.

This Is An Excuse is even more reminiscent of Inside Amy Schumer, as it has a similar unabashed fascination with modern-day coupling, the differences in men and women’s approaches to romance, and white people doing annoying things. Many moments had the audience in stitches. Others didn’t but were obviously fashioned as thought-provoking interludes. Like Schumer, the sketches that made bolder comments on our culture had bigger pay-offs than some of the more shallow ones. While it’s pretty wonderfully written and has benefited from some post-test audience fat-trimming, this is still a debut show, so there are moments of nervousness and sketches with thin premises. But it’s this rawness, manifest in the limited props and homemade zines, that render This Is An Excuse even more intimate and exciting, and their intelligent observations all the more affecting. Because they also deal with topics like feminism, race and “crazy girls”, Hayward and Hadid frolic through the pop cultural landscape of 2016 amongst pithy Jezebel articles and Lena Dunham essays, but they’re not camouflaged amongst it. They deliver a unique enough comedic manifesto to make you believe that theirs will be careers worth watching.

During the show, Cupid Francis and Psyche Lauren get equal opportunity to make their cases, and it’s this balance of the sarcastic and the romantic that perfectly captures the spirit of This Is An Excuse. There are plenty of acerbic observations made about fuck-boys and white assholes, but, like the cosy pyjama party feel of the room when you walk in it, This Is An Excuse is a warm-hearted reflection on love’s infinite possibility, even if it no longer manifests itself exclusively in one guy and one little lady going to the chapel. To those too wrought by misplaced nostalgia for that ‘simpler’ time, Hayward and Hadid make a convincing case that love’s evolution is a good thing. Maybe the love story of your modern life is with your best friend, or your dry cleaner’s aunt (how should I know?), or maybe, like Lauren and Francis, your comedy partner.