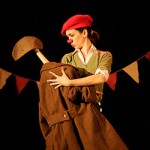 The venue for this show is called the Assembly Roxy, but it would be known to veterans as the Roxy DeMarco, and is located midway between the Pleasance complex and George Square. I’d recommend getting there early as it’s a bit visually restricted in the upper level.

This is a solo show about a woman coping during the blitz while her husband is off at the war. The star of the show, Leela Bunce, is a tall slim lady who describes herself at one point as having lustrous brown hair, a soft jawline and slender fingers. the show starts with Leela on stage welcoming the audience in, with a silent commentary about some of the people going up the stairs (who are thus facing away from her). Much of the show is mimed, using props and Big Band music, and imaginative sound and lighting effects. Leela uses a lot of costumes during the show to tell the story of the women who coped with the effects of war with confidence and style. I’m still not sure whether having a red nose for the whole show was helping to dispel the tension or just to keep the audience focused.

Though it was not a comedy as such, there were a number of slapstick moments when mail was being delivered, and we were told in no uncertain terms of the appropriate level of applause the routine required. Other moments were painfully sad, as when the train came in without a loved one or a child was separated from his mum, but others were skilfully amusing (Winston Churchill in bread dough). The tense moment were possibly a bit scary for some as we sheltered in the Underground while bombs fell overhead (lots of explosions). The only moment I thought a bit inapt was the song using random French words (it’s been overdone and is a little racist, isn’t it?).

But for one false moment, you do get an hour of assured and confident acting, mime, slapstick and puppetry (and a sing-a-long) to tell tales of heroism and courage during war. The room was almost full, so book now, get there early and don’t turn your back on the stage when you arrive.

Waiting for Stanley is playing at Assembly Roxy