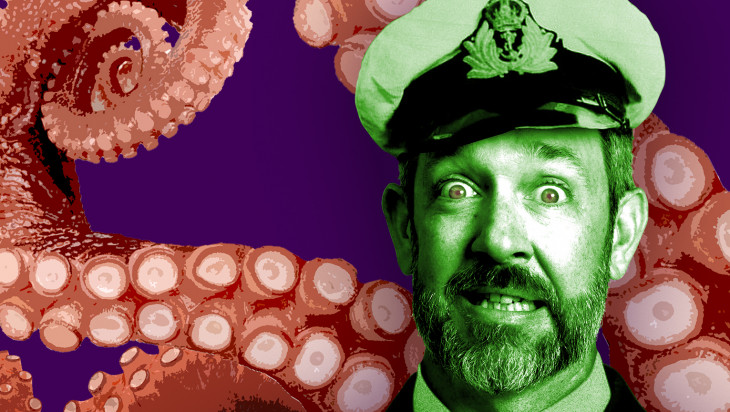 2. If you were once part of a British World War II submarine crew who were killed one by one by an unseen beast, while attempting to assassinate Hitler, then you will find this farcical comedy play to be very relatable and entertaining.

3. If you were not once part of a British World War II submarine crew who were killed one by one by an unseen beast, while attempting to assassinate Hitler, then you will find this hilarious play to be very comforting and amusing. Either way, you’re a winner.

4. You get to experience six amazing character peformances, combined with a soundscape that will transport you into the bowels of a submarine for a joyously tense story about a hunt for a crazy monster.

5. This is from the makers of Incognito!, Denouement!, Mystery Radio Theatre, Man Bites God and Theatre of the World, so you’re in good hands as you let these pros provide you with an evening of fun and a timely reminder that the comedy festival isn’t just for stand-up. Hope to see you there.

Subhumans is on at LaMama April 19 – 24 All tickets and information can be found here:

Radio Mystery Theatre is comedy at its most traditional, old fashioned and in some ways this is truly alternative comedy at the festival and it’s a refreshing palate cleanser.

The Cast of Radio Mystery Theatre are ambitiously staging three different radio plays during the MICF. All of them involving murder but sending up different genres. This one Whodiddendunnit is a send up of an Agatha Christie style murder mystery in a big old mansion with a butler, an inheritance, every one having a motive and a re-appearance of a long lost son.

There have been quite a few radio plays on at the Comedy Festival over the years with Radio Variety Hour getting a reprise on over at The Butterfly Club during the festival. This version is more formal and less anarchic but has a great big cast of about eight and is its own kind of fun. It keeps itself nice, with most of the humour being the sort that might have been performed at any time in the past eighty years and had audiences laughing. There were only a couple of anachronisms, like the word nail-gun which I think is actually a bit unnecessary, I was quite enjoying the whole historical re-enactment sort of feel of it all. But if it gets a laugh, it doesn’t really matter, this sort of whacky humour has been around since before The Goons and they began doing their thing in 1951 so in a way it’s in keeping with historical tradition of comedy radio plays after all.

A disappointment for me (in both radio shows on at the moment) is the lack of a specific foley artist. This important radio job that still exists in movies today is a way of making all the sound effects with everyday objects. To me this has always been one of the most exciting components of watching a radio play being performed. It is the big visual component for the audience (“ooh what is he going to use that big tank of water for?”) that the radio listeners will never see but adds to the radio listening experience. Here we had a table laid out with objects that got me excited, a chain, a knife, a bust and so on, but in the end they were used as silent props which did not make sense because they serve no purpose for the radio listeners. So apart from the odd knock on a table by the actors, most of the sound was pre-recorded and without the Foley artist running about doing his or her stuff, it’s a bit like watching a play reading.

This was a very slick production, well written and acted with plenty of laughs. If you are also a fan of 40s film noir or Enid Blyton you might wish to check out the other Radio Mystery Plays Murder Me Again, My Darling and The Adventure of Smuggler’s Cove

1. These are comedy mystery radio plays performed live in the old-timiest of traditions.

2. There are three different plays to choose from, depending on which night you come. Collect them all.

3. There’s an Agatha Christie murder mystery one called WhoDiddenDunnit, a hard boiled private eye one called Murder Me Again, My Darling and an Enid Blyton meets Scooby-Doo one called The Adventure of Smuggler’s Bay.

4. There’s a different special musical guest every night, including Man Bites God, Nicholas Roy, Floyd Thursby and many others.

5. It’s something that you could take your mum and dad to. Or a Sex Worker. Or both.

Mystery Radio Theatre is made up of 3 different shows on different nights and they are on at LaMama in Carlton, March 31 – April 10
For more information see the MICF Website:
http://www.comedyfestival.com.au/2016/season/shows/mystery-radio-theatre-james-hazelden