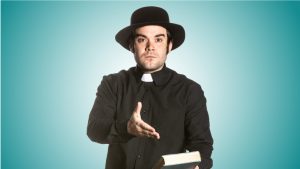 An evening of Southern Gothic inspired short stories hosted by an increasingly frustrated and disillusioned Southern US preacher. It certainly doesn’t sound like an obvious premise for a comedy show, and indeed it isn’t a straight stand-up show, but Martin Dunlop does an excellent job of engaging the audience in the character and progressing the story arc through to a quite dark conclusion with some excellent laughs along the way.

The unnamed central preacher begins his sermon by establishing that we, his audience, haven’t been coming to church often enough and we are falling into a life of sin. He promises to share 4 stories with us to help show us all the path of glorious righteousness. Playing all the characters in a selection of willfully historically inaccurate and ridiculous tales, Martin does an admirable job of jumping between the cast of characters and back to the central preacher, he even manages to sneak in some 4th wall breaking directors commentary which shows great humility and awareness of the absurd spectacle on stage.

The show has some rough edges, Martin performed with a few notes on his hands to prompt himself and a couple of times got thrown out of script by technical demons. He handled this remarkably well and by being willing to engage with the audience as himself even in the middle of a character piece he created some of the warmest and funniest moments of the show. It’s a show that benefits from having its rough edges on display, a fully polished version of this show would lose some of its charm.

The creativity and the writing is the true star of the show here, clearly not wanting to shy away from a challenge Martin has written himself a lyrical challenge that he has to summit each night, as he said himself after stumbling on a line “Come on Martin, if you’re going to write it you need to be able to say it”.

This is a great storytelling show, with an ambitious range of characters dexterously performed. The charm is in the rough edges and anyone who enjoys dark absurd storytelling and fancies a break from the standard standup format would do well to check out this show. 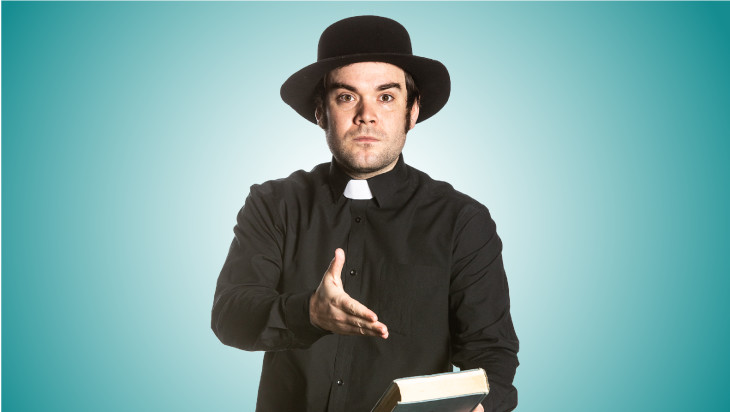 1. It’s a Southern Gothic parody show and I explain what Southern Gothic literary fiction is, so you’ll be able to tell that to your friends and make it sound like you done got book learning.

2. It’s a one-man play where I do all the characters so you don’t have to keep track of which actor does what, because I’m doing all of them. Isn’t that simpler?

3. You kept watching True Blood for the dialogue and the setting, not just all the hot butts.

4. You were led to the show by crows.

5. I promise to show you what they found in the river.

Small Tales Of Little Mercy is on at The Butterfly Club from April 12 to April 21
https://www.comedyfestival.com.au/2019/shows/small-tales-of-little-mercy 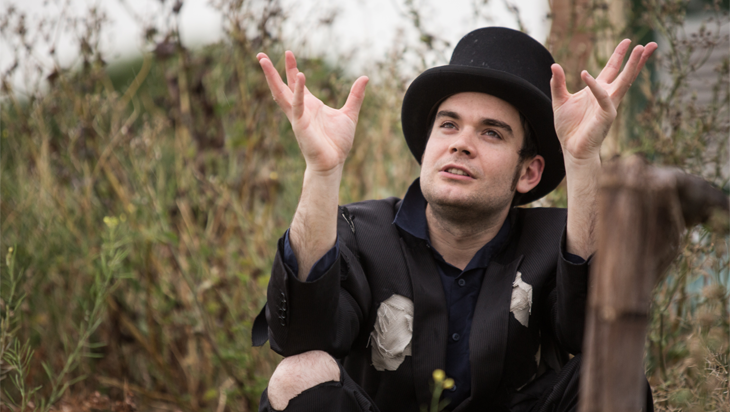 1. Your mother has promised you to a wealthy old landowner, and you crave a night’s respite from his cruel bluster and ill-fitting wooden teeth.

2. You’re a doctor seeking shelter from weeping families and their many questions.

3. You’re a tall drink of water, clad in flannel and barely-contained sexual energy, free for the night from the sweet-and-sour approaches of your much-widowed employer.

4. You’re a con-man who had to assume the role of a priest 25 years ago, but circumstance kept you in the vestments when the game went south.

5. You’ve a quick hand and a cute smile, but one glimpse of those limpid blues’ll tell even the stiffest boozehound you’re just no damn good.

Martin Dunlop: All Change Is Death is on at Tuxedo Cat from April 9-19. For more information and bookings visit:
http://www.comedyfestival.com.au/2015/season/shows/all-change-is-death-martin-dunlop

It was the memorial service for Agatha Ignacia Dunlop. Her nephew and niece, Martin and Ailsa Dunlop, paid tribute to this cantankerous old woman with an hour of stand up (who cares whether that’s what she wanted, she’s dead anyway!). This was an interesting way to package an hour of stand up and theatre that worked reasonably well.

The opening eulogy did a brilliant job in setting the scene and painting a picture of the deceased. This very unlikeable woman was described using some wonderfully colourful language and we learnt of all her amusingly disgusting character traits. It was nice how they addressed the audience as family members and acquaintances which immersed us into their world.

Both did short sets of stand-up which was the main purpose of the show. Ailsa’s brand of stand-up was very dark, very graphic and immensely self-deprecating, while Martin went the lighter storytelling route with a few short tales from his life. Both were a little hit and miss in getting laughs but they certainly could hold our attention. Although prefaced with some witty lines about Agatha’s appreciation of their comedic work and both containing dark and graphic material, these sets weren’t particularly tailored to the overall story and just came across as their regular club sets presented verbatim.

This pair really shone when they were on stage together for some short theatrical pieces. One was an awesome Tennessee Williamsesque dialogue that allowed them to adopt silly accents and spout some wonderfully surreal lines. The other piece was a pair on concurrent monologues that had a beautiful twist in its conclusion. In both pieces Martin adopted a simpleton persona while Ailsa played the straight woman. Although they were often on the cusp of corpsing and they dropped character once to point out how clever they were (which disrupted the flow of the scene, resulting in dropped accents and losing their places) the duo pulled these off with ease and had the audience in hysterics.

Even though we were presented with some so-so stand-up in what was essentially a two hander stand-up package, it was the premise and the theatrical scenes that made this show for me. If you’re up for some gallows humour and want to see some great comic actors strut their stuff, don your mourning clothes and pay your respects to Aunt Agatha.

The Crepe Hangers Ball is on at the Portland Hotel at 9:15pm until October 4 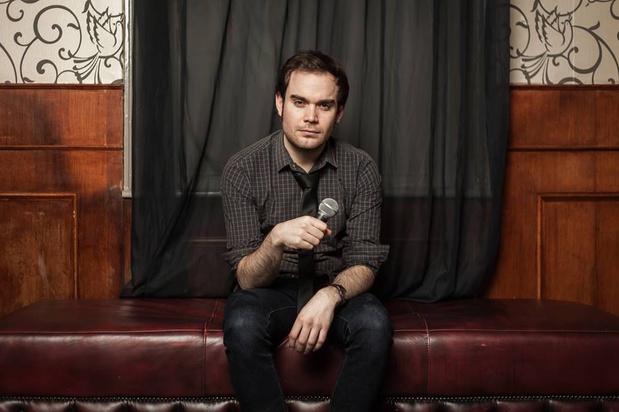 1. Her ship never arrived, and though the townsfolk whispered that it had disappeared on the treacherous voyage round Cape Horne, she still comes to you in the dark and quiet, and sits there, waiting.

2. There is a scratching at the edge of hearing that calls to you, demanding that you become something …other.

3. Come on, 12 dollars for 45 minutes of exciting original standup! What are you, a bum? Get outta here!

4. Evelyn picked up her son’s limp corpse and carried it out the front, laying it gently on the curb. Truly, this was the Hardest Rubbish Day. 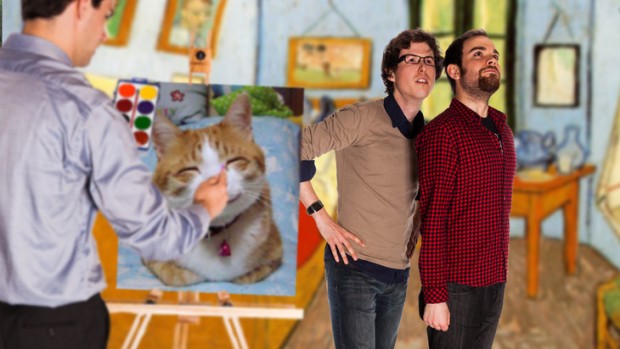 After exploring Australian history last year (Australia! Australia! Australia!, MICF 2012) the duo of Abel Seaman (Martin Dunlop and Michael Teychenne) are back to tackle the art world. This is a silly hour of sketch mocking many artists and movements as well as taking clever swipes at the creative process, art marketing and art appreciation. If already you’ve seen the YouTube videos promoting the show you’ll be pleased to know that only some of this material makes an appearance, plenty more ideas are on offer.

There is a comfortable mix of one joke sketches and more involved pieces. Many scenes explore some clever concepts and contain witty lines while others are based on pure silliness to keep the audience chuckling. A couple of recurring sketches are problematic; one fails to repeat the brilliance of the first iteration while the other only exists to set up a rather limp finale.

At times they assume you know some background about the artist/movement to work things out on your own, but these jokes are general enough to get laughs on a superficial level. One particular sketch assumes knowledge about two kids TV shows about art and if you aren’t familiar with either program understanding the references is quite a challenge. They do preface it with a warning of age specificity and add plenty of visual gags but the considerable length of it puts it in danger of losing some punters.

Using costuming and props, they bring an array of wacky characters to life. It often seems that Michael is the one most eager to don a wig and put on a silly accent while Martin plays the straight man perfectly to keep the humorous lines flowing. They bounce off one another seamlessly and can easily cope when one goes momentarily off script or the audience throws up a surprise.

Art! Art! Art! Is a highly entertaining hour of sketch by two talented fellows. Their enthusiasm is infectious and their stagecraft is polished enough to make it look effortless. I look forward to seeing what thrice titled show they bring us next year.

Art! Art! Art! is on at Highlander Bar
http://www.comedyfestival.com.au/2013/season/shows/art-art-art-abel-seaman