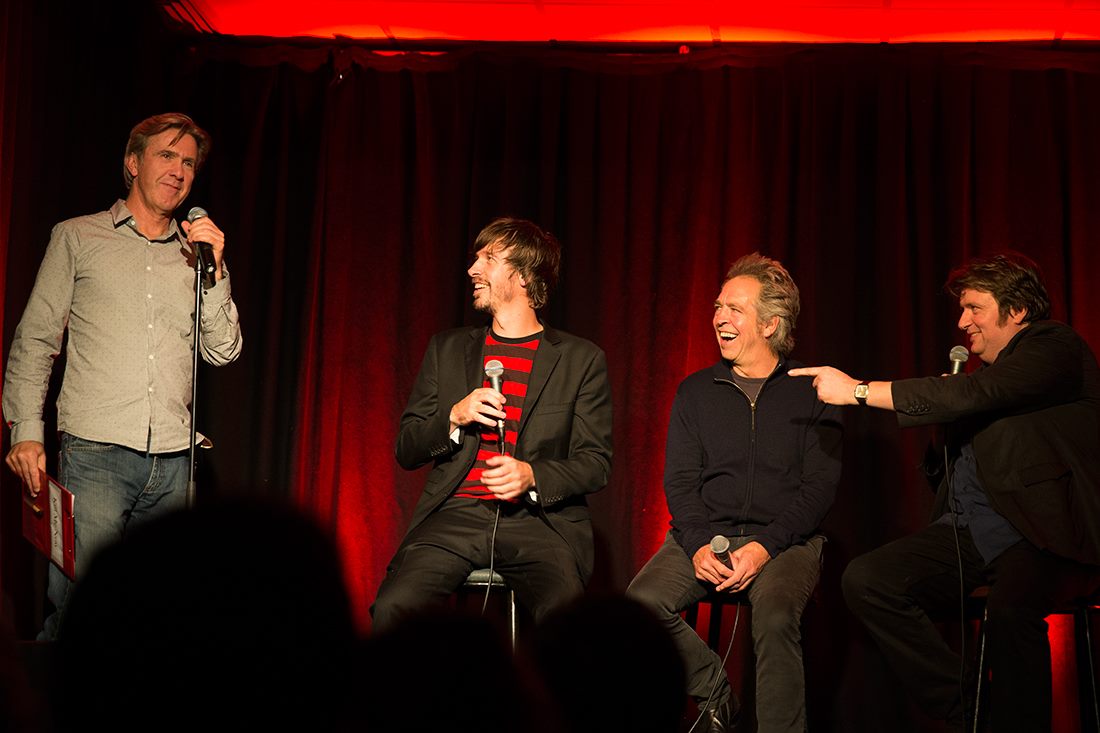 A month ago I was lucky to be in the audience for the first birthday show of Yarraville Laughs. It was one of those really special nights in a club with a top notch, awesome line-up of standup from Glenn Robbins, Dave O’Neil and Tony Martin. Then to top it off Shaun Micalef dropped by to add to a finale that was a live version of radio panel show Now I’ll have to Kill You where comedians tell stories that they’ve kept secret from others. It went late into the night. Hosting it all was Matthew Hardy, comedian turned entrepreneur who returned to Australia just over a year ago and decided to open up a comedy club in his new neighbourhood of Yarraville, a gentrified, latte-fied village in the inner western suburbs of Melbourne. In only it’s first year, the venue can boast having had performers such as Tom Gleeson, Denise Scott, Hannah Gadsby, Dave Hughes, Cal Wilson, Peter Hellier and the list goes on.

The last time I saw Matt was in his show Willy Wonka Explained which he performed with the actress who played Veruca Salt in the original film Willy Wonka & the Chocolate Factory, Julie Dawn Cole. The fact that he was able to talk her into coming all the way from England to Melbourne, to perform in a relatively small room for his comedy festival show, says something about Matt’s ability to talk people into things and make stuff happen.

Lisa: How long were you in the UK and what was that like?

Matt: For a total of twelve years. 8 in the 90’s and 4 sporadic individual years since. I arrived just before the comedy boom began, and just before the Britpop boom began too. Comedians became rockstars and rockstars became comedians. The Gallagher brothers from Oasis, Jarvis Cocker from Pulp, Damon Albarn from Blur, were all being as funny as the comedians in their media interviews and the comedians were conducting themselves like rockstars. Mighty Boosh, Ross Noble, Russell Brand. Somewhere among all that, at least attending the same parties anyway (!), fair dinkum, was me. My own comedy highlights were writing with or for Ricky Gervais and Kelsey Grammar, headlining the Mecca, which is the Comedy Store in Leicester Square, and stepping on stage at Glastonbury (again, fair dinkum!) just as the acid kicked in. Whoops! Ah, they were the days. There’s many more lowlights but you didn’t ask that question.

Lisa: Was it there that you learned about running a comedy room?

Matt: My biggest lessons in regard to our Yarraville Laughs club is why some comedy clubs work, and others don’t. or how a good club can become great. It’s never a mystery, or a case of good luck. Hard work and smart choices, and financial risks lead to the performers and the punters having an equally enjoyable night. Which leads to them wanting to return.

Lisa: When / How did you get the idea of running a room in Yarraville yourself?

Matt: I had my first kid (a beautiful daughter) which meant no more jet-setting back and forth to London. We settled in Yarraville and rather than wait to see if Spicks & Specks or whichever other shows would invite me back, I decided to be proactive and start a regular club, which ideally leads to a regular income.

Lisa: Tell us about Yarraville Laughs, what kind of room it is and how it is organised.

Matt: We’ve built a stage within the original stage, which creates the impression of an illustrious theatre environment.
I run it with the great man James Young, a Melbourne entertainment maestro (formerly RRR, now Cherry Bar), who’s also a great mate.
I wanted to create the best comedy club in the country and think we may have achieved that goal.

Lisa: Do audiences tend to be local?

Matt: I’d say it’s 30% local and 70% from everywhere else. We have the data (a very unfunny word I know!) showing where people come from, and there’s people from as far as Brighton, South Morang and Glen Waverley who are attending. And often.

Lisa: Have you had any feedback from the community?

Matt: Definitely. One lengthy hate letter and hundreds of pats on the back, fortunately. Pretty good ratio.

Lisa: Considering that it is in the less fashionable western suburbs of Melbourne, were you worried about getting audiences to come to Yarraville for comedy?

Matt: I thought, like Kevin Costner in Field Of Dreams, that ‘If we build it, they will come’. As long as we build it to withstand all sorts of weather. Luckily, it’s been mainly sunny.

Lisa: Were you worried about getting bigger named comedians to come to Yarraville?

Matt: Not really because again, being a comedian, I know what comedians want, and how to create an environment where they’re totally comfortable and confident. I’m not personally rich or famous or mega talented, but I’ve worked with and am friends with most of the comics who are.

Lisa: Was it quiet at the start and easier as things went on?

Matt: I’m beginning to wonder how up myself I may be sounding here, but from our very first show we’ve sold out. Mick Molloy, Bob Franklin and the Nelson Twins is a fair bill up front, and it’s maintained itself since then. But this fact has arisen only because of how much relentless hard work everybody involved puts in. The Yarraville Club’s General Manager has been incredibly supportive, his staff are passionate, plus the restaurant provides great meals and friendly service so it’s all part of the package. I am obsessed with checking ticket sales (too much so) and if they slow down, our work rate speeds up. As does our ad spend, unfortunately!

Lisa: Have you had any ‘challenging’ experiences from patrons – or performers?

Matt: Not once from a performer and only once from a patron. Who was a woman, surprisingly, who we had no choice but to evict because she was spoiling the show for everyone else. We knew this because everyone else was telling us. That said, her hate letter arrived shortly afterwards. Even though we’d given her money back and two free tickets for another show as she departed. Hey, we all have bad days.

Lisa: There are quite a few comedians running successful rooms around Melbourne at the moment do you think a performers own experience helps them be good at it?

Matt: I think there’s just three other comedians running successful rooms. If there were a couple more I’d not have bothered starting my own with James Young. I gauge a successful comedy club to be one which is paying respectful, guaranteed fees to the performers, charging the patrons a respectful fee to get in, and attracting a large number of patrons to most shows. Being a comic should make it easier to run a club but that’s not always the case. Anyway, my way isn’t the only way, and others gauge success differently. And we’re still minnows compared to the promoters who bring out, say, Dave Chappelle.

Lisa: Does the percentage of people Dining / viewing a show change a lot from week to week and does this change the configuration of the room?

Matt: Not really. For massive acts (like the upcoming Michael Winslow from Police Academy shows) we do rowed seating to fit more in, otherwise it’s table seating but either way works for us.

Lisa: Name some of your favourite experiences in running the room so far.

Matt: MC-ing our first ever show to a full house, headlined by the brilliant Mick Molloy. Having James Young hold up the phone when I rang Yarraville Laughs from a Thailand family holiday, so I could hear the deafening laughter Dave Hughes was creating. Booking a diversity of comedians, rather than just four white men every week. Even if white men make up the majority of comedians. Our first birthday show with Glenn Robbins, Dave O’Neil, Tony Martin and a surprise appearance by Sean Micallef. Who are, umm, four, white, men. Hey, I invited Julia Zemiro and Magda but they were both unavailable.

Lisa: Tell us about your up coming MICF shows.

Matt: We have EFFIE the Gold Logie winning Greek Goddess of comedy, who’ll be speaking about her new baby girl, Aphie (short for Aphrodite). Effie & Aphie. Simple but fucking funny I reckon.

And we have Michael Winslow from not just Police Academy, but also Gremlins, Spaceballs and regular voice-work (including as himself) on both The Simpsons and Family Guy. Both have been with us before and both are truly superb performers.

Lisa: I’m guessing running a room has meant you don’t get out to do stand-up as much.

Matt: Yes and no but I am the MC of all of our shows (if I don’t employ myself, who else will) so I’m not missing out.

Lisa: What advice would you give to other performers thinking of starting up a room.

Matt: Go for it, do it thoroughly and don’t cut corners, have a partner to bounce ideas off, and then when it works, enjoy the camaraderi

e with your fellow comedians and feeling like you’re overdosing on adrenaline after each great show. And every room ends so have fun while it lasts! 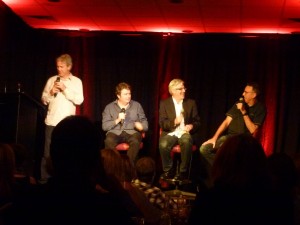 Find out about upcoming shows at Yarraville Laughs on their website http://www.yarravillelaughs.com/

You can book dinner with the show too.

Find out about their Festival shows on the MICF website

Effie A Date With Effie: Looking For Love… And Child Support!