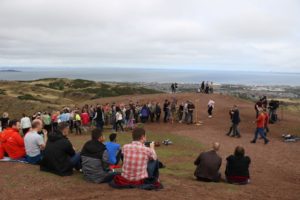 This is the tenth year that Barry Fearns has hosted a comedy show on a sort of flat bit just down from the top of Arthur’s Seat. He has to persuade comics to make the trek and also carry the audio equipment up (twice this year, as the initial amp failed to work). One of the comics cancelled at the last minute but Barry managed to talk Matt Price into doing the show and it turned out to be as much fun as it always is.

Along with Matt Price, we were treated to a song and some chat from comedians Jon Long (a delightful song about working in a London waste recycling facility, with one vital word changed due to all the youngsters at the show) and Masud Milas, who’s material was about growing up in Hong Kong with a mother from Kenya and a father from Peterborough. All excellent stuff, despite the wind and occasional dust flurries. The misty rain held off this year until just after the show had finished, and even had some sunshine.

Between acts, Barry introducted a new sport called TML and players were selected from the audience by the time honoured method of rock, paper, scissors. The aim of the game was to see how long you could extend a metal tape measure out away from you before it collapsed.

All great fun and the crowd of 300 hardy souls were very happy by the end of the 90 minute show. Heartily recommended if you are in Edinburgh and not too knackered by this stage of the Fringe to climb up a bloody great hill.