The Improv Conspiracy will soon return to The Croft Institute for another festival season of hilarious improvised mayhem. 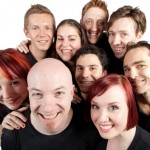 Here are 5 Good Reasons to check out their new show Our Friend Harold:
1. It’s 100% improvised, so no two shows will be the same. We have no idea what is going to happen each night until you suggest something, which means we’re always genuinely excited to perform.  Get burnt out or sick of our material halfway through the festival? Not us!
2. Each show is actually TWO shows in one!  The Harold is an improvised format that takes around 30 minutes to perform, so our hour-long show features two Harold teams who each get their chance to make you laugh!
3. We now have five different Harold teams, so you’d have to come to three shows in order to see them all and pick your favourite.  And we really recommend that you DO pick a favourite, and let everyone know… we want our in-house team rivalries to mimic the best feuds in the sporting world!
4. In addition to our large list of veteran cast members, we’ve just added 11 hilarious new performers to the roster. We’ve been training them in a secret comedy laboratory since October! Seriously, we actually have a secret comedy laboratory: http://improvconspiracy.com/workshops 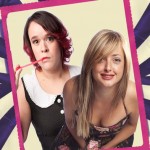 1. Are you feeling a little bit dirty? Or are you simply feeling a little bit thirty? Whether you’re in your Dirty Thirties, Naughty Forties or the Nifty Fifties, Morven and Erin’s tales
of the past, the present and perspective on the future really resonate. The ladies, 31 and 35, have led an interesting existence to say the least!

2. If you’re in your twenties this is a show that will give you plenty of belly laughs – at some point you’ll reach your thirties – they did and look at them now! The show is pro-ageing. It’s about embracing the fine lines, nuzzling those metabolic changes and getting ready for the next stage; you can’t go backwards, only forward!

4. Morven treats the audience to a demonstration of her ‘special’ talent, which all audience members can attempt to learn at home, guaranteed to massively improve your life, in many different ways! They’re a generous pair and want to make sure they’re doing their bit to ‘give back’.

5. The girls powered through a great run at the Adelaide Fringe securing great reviews and awesome feedback from the crowds (despite a bumpy start with knobbish venue owners of the Bullshit and Hard to Bear Adelaide pulling the plug on day 1 of Fringe – thanks Ambassadors Hotel Adelaide!). This duo of up and coming Melbourne comediennes have been working hard all around the world and have great show-chemistry. Come to the show, share in the fun and the laughs and feel as though you’re hanging out with a couple of old mates.

And now: the 5 reasons for Here Come The Girls 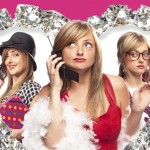 1. The sell-out 2012 show returns with a new line up of hilarious ladies from the local Melbourne circuit, interstate and around the world. Host Erin Melville (Otherwise known as Lady Melville) puts together a different
line up every night with a few surprises!

2. Each show features one bloke, the token bloke or as they’re affectionately known, the ‘cock spot’. Just one though. 5 girls, 1 guy – lucky fella!

4. The show will continue it’s support of White Ribbon – Australia’s campaign to stop violence against women. Last year the show contributed part proceeds and sold bands and ribbons, raising almost $1000. A one-off all-proceeds event was held in November 2012 and HCTG raised over $1400 in one night.

5. It’s a fun night out for girls and guys alike, something for everyone. Silly, sassy, surprising comedy… Here Come The Girls!