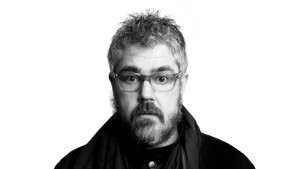 Phill Jupitus’s first show to tour Australia starts off with a witty song lampooning a certain self important rock band: one that certainly placates the Never Mind The Buzzcocks fans! After some light banter about his first experience travelling to the antipodes, he dives into the meat and potatoes of the hour, a series of hilarious personal stories that may divide an audience depending on expectations.

Jupitus warns up top that this is not the nice TV Phill who chats with Stephen Fry on QI. I suspect there were many in the opening night audience who weren’t prepared for the topics covered which are rather confronting. If you feel the need to prepare yourself mentally for this show, check out this clip from Live At The Apollo. Even if you have a strong comedy constitution, watch it anyway as this routine is the stepping off point for the stories in this show.

We’ll wait for you…

That is a sanitised version of what to expect from this performance. He goes into a lot of detail about his experiences with sexual education as a child, a journey through adolescence that is both hilarious and cringe worthy. With the stories set in his childhood there is a wonderful sense of naivety to the jokes that makes the taboo subject matter and graphic language a lot more palatable.

Jupitus is a brilliant story teller with a slightly rambling delivery that gives things spontaneity but the tight script is word perfect. He’s often very animated on stage with plenty of exaggerated facial expressions to emote his state of mind. He transports us to the situations brilliantly, playing all the characters with many silly accents. He is playful with the audience as he assesses our reactions and gently teases us. He is smart enough to leave us with an unrelated silly story so we don’t walk out too traumatised.

Phill Jupitus is very much the consummate stand up and we look forward to many more visits in the future.

Juplicity is on at The Melbourne Arts Centre (The Pavilion) until April 23
https://www.comedyfestival.com.au/2017/shows/phill-jupitus