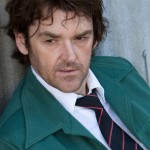 Pinky chose to let fate determine the structure of this show by employing a spinning wheel to select which story he would tell or whether he would sing a song instead. With each tale being a complex and detailed creature he barely scratched the surface of the topics on offer, ensuring that he is unlikely to be repeating himself too much over the run of this show. On the night I attended we were treated to an amusing entendre-filled song entitled “Spooning in a Softy on a Sunday Afternoon”, a letter recycled from his appearance on Women Of Letters, a story about having a limo at his disposal in Rockhampton, Queensland and a wild tale about hooking up with ladies after a show in Busselton, Western Australia.

All the segments were a delight and were frequently hilarious. They contained all sorts of details that were so strange that they just had to be true and this is where he mined for comedy gold. He often made passing remarks about the story at hand which was a bit like an amusing director’s commentary and gave us an insight into his thought process.

Beecroft’s style was a very rambling and slightly shambolic one that was quite similar to that of Anthony Morgan. In fact, some of his vocal inflections sounded quite similar to Morgan at times which is understandable as both men have lived life to the extreme. He frequently took off on various tangents, but he had the good sense to keep these diversions brief and return to the main thread. Adding his physical ailments to the mix and you have a show that could possibly fall apart at any moment, but he held it together and kept us glued to every word.

The one thing that exposes him as not having a background in Stand Up is the way he sighed with despair when the wheel spun up a story he was embarrassed by. He also had the habit of pointing out the truthful facts in his stories and often apologised in advance for a segment not being funny enough. A true Stand Up Comedian is masochistic enough to push through the discomfort of their material and not let the truth get in the way of an amusing line. These were surprising traits, as you would assume that such a Rock’n’Roll survivor wouldn’t give a toss what we believed and that an experienced entertainer would have greater confidence in his material; some might find it unprofessional while others would consider it endearing. In spite of himself, Pinky is a charismatic, seasoned performer who delivered a captivating, though rough around the edges show that was full of great humour.

Mainstream Freak is on at North Melbourne Town Hall in the Meeting Room until October 13.
For bookings go to the Fringe website http://www.melbournefringe.com.au/fringe-festival/show/pinky-beecroft-mainstream-freak/