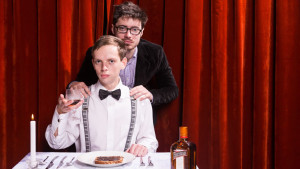 Having enjoyed Dave Warneke’s work in various group shows, most recently as host of the cute late night Facty Fact celebrity quiz show, I was curious to see Dave’s solo work. Well my curiosity is still not quite sated but I enjoyed Dave Warneke Dates The Entire Audience none the less.

This is a production with a very millennial sensibility, it’s got that audience participation thing happening that EVERYONE is doing this festival but is one of the best and clever incarnations I’ve seen and it is pleasingly very optional. It is a sort of Choose Your Own Adventure Show with a specially designed computer program (its surprisingly mature designer was in the audience with us) that takes the audience, via their smart phones, through a set of screens where they can tick boxes or write out suggestions that display on a large projector screen in the form of a pie chart or list. You can see the pie chart change before your eyes as everyone chooses to tick their preferred box which really adds a frisson of excitement to the room.

This adventure decides the show’s direction and reflects the conceit that we are all on a date with Dave.  First up, we must choose a name so that Dave can address us as something more intimate than Audience. The purpose of having Sam Jenkins on stage steering the laptop becomes apparent as he moderates the answers putting the best ones on screen and perhaps weeding out potential lawsuits. Some of them are pretty filthy but we settle on naming ourselves Audrey. The multiple-choice questions we answer include picking the movie we will see on our date (Titanic) the Restaurant (Thai-tanic a real restaurant with hilariously dreadful on-line reviews that are read out after we choose it) and a venue for a second date.

The beauty of this is that every show will be a little different, though occasionally we are given an illusion of choice or have it, sort-of, made for us. I can’t imagine an audience NOT choosing to play the game option ‘Is it Porn’ and Dave jokingly pretty much confirms this. In amongst all this game playing Dave does crack out some actual jokes, tell some conventionally funny tales, shares some very silly pre-recorded segments and he and Sam keep things rolling along nicely. The audience, sorry Audrey, also brings a lot of the laughs to the performance and overall whether you are playing along or not this date proves to be a whole heap of fun

Dates can be unpredictable and occasionally hazardous, you have to make yourself vulnerable and Dave has definitely given himself a risky enterprise with this production. Comedians often joke about how their work reflects a desperate need to be loved by their audience and here every night Dave is asking to be loved and risking rejection by letting us decide if we would date him again. Luckily Audrey was pretty into him and unsurprisingly enjoyed the date.

Dave Warneke clearly has ambitions as a funny host rather than standard solo stand up comedian and he certainly has great hosting skills but it would be good to see more work put into the comedic writing rather than funny stunts which are often a great way to fill a festival show hour and seem to be a feature of most of his work. Still this is an ambitious, audacious and entertaining hour that would be a great show to take your single friends to. You never know where things might lead.