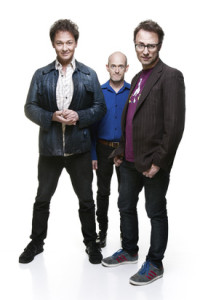 It’s hard to believe it, but Tripod (Scott Edgar, Steven Gates and Simon Hall) have been performing together for 20 years.  Why, it only feels like yesterday that Scod, Gatesy and Yon were in their matching skivvies or whipping up songs in an hour on Triple J. To celebrate this massive achievement, Tripod have released a songbook titled ‘101 Tripod Hits’ – a collection of their best work over the last two decades. In the show version of 101 Hits, the fates decide the playlist, drawing randomly from the book via a bingo cage and 101 numbered balls.

On the evening I attended, there was a good mix of older and more recent material. The bingo cage delivered songs from as far back as Tosswinkle (‘Building An Enid’) to 2013’s Men of Substance (The hilariously choreographed ‘DILF’). The performances got a little shaky on songs being plucked out for the first time in the run, but it’s incredibly impressive that they’re prepared to play whatever the balls decide. On the whole, the performances were fantastic showcasing not only the trio’s musical talent but also their comedic skill. These songs are still so very, very funny, some even becoming more topical with the passage of time.

In the ‘staff picks’ section of the show, Tripod were joined by a special guest, viollinist Xani Kolac, who played a gorgeous rendition of ‘Let’s Take A Walk’. She then stayed on to accompany a performance of ‘Astronaut’, her effects-laden strings turning the song into something hauntingly beautiful, yet still venting the frustrations of those fat gloves.

If you’re a long-time fan, the nostalgia factor will make this a really special show. I was bobbing up and down with excitement when I heard the opening chords of ‘IKEA’, as I was kind of obsessed with the song back in the day (I was a horrifically nerdy teen). But if you’ve somehow missed Tripod until now, it’s a wonderful way to get a feel for what they’re all about.

Although no two shows will be the same, Tripod have a back catalogue so brilliant, you can be sure you’ll have a great time. 101 Hits is a whole lot of fun and a must-see for fans. 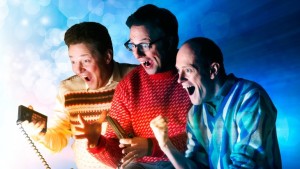 Tripod (Scott Edgar, Steven Gates and Simon Hall) have teamed up with legendary composer Austin Wintory and the MSO to produce a suite of songs about video games that sound as beautiful as they are hilarious. This Gaming Life spans the history of gaming, from the pixelated magic of early arcades to the expansive 3D universe of Skyrim, and explores the depth of Tripod’s relationship with the medium.

The songs in this oratorio are stunning. Yes, there are plenty of gaming references for the nerds in the audience – I did a little inward squeal when they mentioned the Nesingwary quest line from WoW – but more than anything, this is an ode to the social aspects of gaming. How they can cement friendships, help us traverse the distance between ourselves and a loved one, and create lasting memories in impossible landscapes.

This Gaming Life is also incredibly funny. Tripod’s lyrics deftly skewer the industry, gamers and their concerned loved ones. A song targeting the absurd designs of many female characters was my personal favourite. As a special added treat, we also got to experience a beautiful performance of Wintory’s Journey score, complete with some choreography and highly suspect costumes from Tripod.

Partnering with the MSO for this show was absolutely inspired. The impact of the orchestra emphasised the scope of Tripod’s history with gaming. Scod, Yon and Gatesy have the kind of on-stage chemistry that can only come from years and years of working together, and it’s an absolute joy to see them in Hamer Hall in a performance of this magnitude.

As it was only a short run, Tripod’s This Gaming Life has already finished up, but you can check out one of the songs from the show at this beautifully ‘90s website: http://content.mso.com.au/driveking/