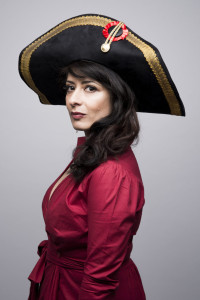 I’ve been a fan of Shappi’s since seeing her in Melbourne and reading her autobiography and went along knowing nothing about the subject matter of this show. It was certainly different from previous outings, being based around a glamorous, historical figure other than herself, but also less surprisingly, it was utterly entertaining.

Mistress & Misfit is an autobiographical show of sorts, but it is mainly a biography of another fascinating woman, Emma, Lady Hamilton, lover of Horatio Nelson, someone I knew nothing about. The Space she is performing in is a lecture theatre, perfect for her show and one of the most comfortable for the audience I’ve been in. Turns out Emma, Lady Hamilton had a pretty amazing life, starting in poverty, becoming a sex worker, courtesan, married to a Lord, then a famous mistress and finally ending in poverty again. I’ll leave it to Shappi to fill in all the extraordinary details, for she does it so well.

Shappi also manages to wind some personal stories through the show. In this way she is able to explain why she relates to the story of Emma so intimately. She relates to feeling outside of the society she lives in, from the ‘wrong class’ and trying to learn it’s secrets and fit in. She also understands having powerful men treat you like crap. I love the way Shappi is able to crack jokes and talk about sexual politics though history, her own as well as Emma’s, without sounding like she is being a political comedian. It’s all very chatty and friendly.

Shappi is a delightful raconteur and will always put on an excellent Festival show. Mistress & Misfit  should satisfy the history geeks, Shappi fans and pretty much anyone just popping in to see an interesting and funny comedy Festival show. 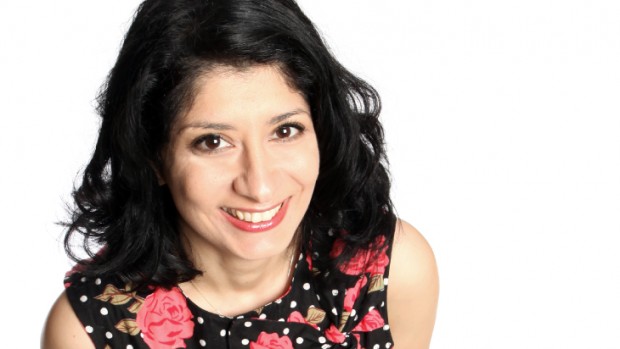 Shappi Khorsandi is one of those enjoyable comedians who make you feel like you are catching up with a friend you only see every couple of years. She even does material about this and her own intermittent friend who she chose to be her birthing buddy for her new baby after the father piked out. Yes a lot has happened since we last saw Shappi and as jet-lagged as she is, she’s going to regale us with some pretty juicy stories, interesting theories and even a bit of surprisingly blue material that seems to surprise her more than it does us.

Her last show in Australia Me and My Brother In Our Pants, Holding Hands in 2012, spoke more about her amazing childhood as an English immigrant from Iran and about being a mother in a marriage that’s falling apart. She also covered some ground that she goes over in her current show, such the difficulties in dating as a single mum, but her 2012 show had a lot more depth to it and the surprise ending of having just started a relationship with a woman. In part of the whole catching up thing, she lets us know pretty early that that relationship didn’t last.

I first came to know Shappi through her fabulous autobiography A Beginner’s Guide to Acting English. Her comedic storytelling skills are clearly inherited from her famous father who fled Iran with his family because of his comedy writing. Shappi touches on her past with her material on refugees. It’s hard to tell if she knows what a hot political topic that is here, but she’s not aggressive about it and finds a very appreciative audience.

Shappi is not a shouty or angry comedian but she manages to cover a lot of controversial ground and while occasionally garnering gasps of horror she maintains just right light touch to make it all palatable and keep the show in a fun mood. Her last section about sex, which she sizzles early on, is also about her vague theme of being free to speak up as well as feeling more comfortable about your sexuality as you get older.

Like all her previous work this show has a lot of great jokes and ideas, it’s clear that Shappi is a talented, entertaining, comedian with a lot of experience but the show itself could use a director to get it into some sort of shape. It’s very funny, charming and spicy, but also a bit scrappy and all over the place. Yet, it still manages to be a fun show to take your friends to. Considering Shappi is a sleep deprived new mother with two kids trying to put on a Festival show on the other side of the world, a bit of scrappiness, with so many great stories and laughs, is pretty forgivable.

Shappi Khorsandi is on at Melb Town Hall until April 13
http://www.comedyfestival.com.au/2014/season/shows/shappi-khorsandi