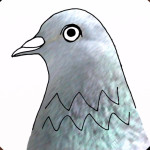 Even though everything was clearly laid out in the blurb, I was not prepared for (A Smidge of) Pidge. Walking out of the venue, I was still trying to process what I had just seen and determine whether it was comedy or performance art. This self-described black comedy certainly provoked discomfort and thought but unfortunately failed to make light of the topic despite all the absurdity it presented.

The subject of existential dread made for some heavy going, even when the performer was standing in front of us dressed as a pigeon. Vignettes apparently depicting the five stages of an existential crisis seemed to be strange for strangeness’ sake. Confusion may be part of a crisis but it didn’t always add to our enjoyment. Sequences describing art theory may have tickled the fancy of the odd art critic but a general audience may have found it impenetrable.

Sherilee Kahui tried to sell the material to us but still a chasm remained between artist and audience. Monologues about how shitty humans can be were delivered in an ironically cheery manner but this was not enough to keep the audience from only seeing a cry for help. She managed to get some brief laughs while addressing us like a Playschool presenter but generally the crowd were more shocked than amused. Likewise skulling several glasses of wine may have raised a cheer from a rowdy mob but in a theatre setting it looked depressing and sad. Even nervous titters were a rare occurrence.

This performance wasn’t completely devoid of laughs. She had some wonderful comedic premises such as purchasing a Five Year Plan to get others off your back and the venue staff struggling to keep the Pigeon focussed on the show. These managed to get good laughs even though they tended to fizzle out.

The clowning sequences involving the Pigeon character were delightful in the way Kahui interacted with the space and the audience. Her wordless performance was enthralling, a little confusing at times and regularly amusing. This unpredictable creature was a wacky loose cannon and clearly triumphed over her human counterpart. The chance for each punter to coo or squawk like a pigeon was empowering and heaps of fun
.
(A Smidge of) Pidge was such an ambitious show and that is clearly what the Fringe is all about. It’s certainly an event worth experiencing but if you are just looking for laughs, this won’t give your funny bone the tickle it needs.