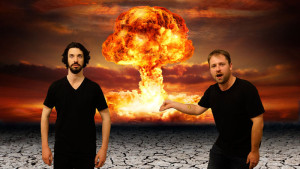 Uncle Orwell’s Doomsday Party is described as “a loose 50 minutes of live and pre-recorded sketch”, so loose in fact that it regularly makes for an incoherent mess. A lot of it is silliness for silliness sake but those hoping for a clear plot will probably come away from this show confused and disappointed.

The main plot involved us being in a bunker with conspiracy theorist and survivalist Uncle Orwell (Matt Jenner) and the naïve Nathaniel (Simon McCulloch), watching them bicker and interact with what was left of the outside world. The strong introductory video set up this world in decline brilliantly, so hopes were high for an engaging and amusing story. Alas this was not always the case with many ideas quickly abandoned without resolution and only a handful of belly laughs to be found.

Sketches both live and filmed unashamedly borrowed from various movies and television shows, and regularly outstayed their welcome as catchphrase fatigue set in. They did nothing particularly clever with these tropes with the singular joke behind them being recognition and their absurdity when stripped of their original context. They regularly ignored all logic set out for this world which made things even messier.

The concept of having multiple CCTV cameras throughout the neighbourhood was a clever device to hang all their unrelated sketches on the central plot and introduced many additional characters to this two hander. It was a shame that nothing particularly amusing was done with these eccentric souls, many existing solely for the “Animal House” styled montage at the end.

There were some instances of audience banter which could have been an interesting method of creating an immersive atmosphere. A Christian zealot dealing out salvation to punters had some fun interactions but all other instances resulted in awkward exchanges with Jenner that didn’t really go anywhere, save for a few lame call backs.

The most frustrating thing about this performance was the delivery of dialogue by Jenner. They were aiming for a gruff, unhinged loner, but sitting through this nod to “Rick and Morty” for fifty minutes was a form of cruel and unusual punishment. It was so rambling and stilted that he gave the appearance of either always working off the cuff, struggling to come up with witty lines, or having no talent for remembering and delivering his lines. At least McCulloch was there to propel the plot forward with his understandable end of the dialogue.

The best way to enjoy this show was to park your brain and let the absurdity wash over you. Anyone looking deeper and not familiar with this duo’s viewing habits would only find frustration.

Uncle Orwell’s Doomsday Party is on The Improv Conspiracy until October 2
https://melbournefringe.com.au/program?event/uncle-orwells-doomsday-party/100ffcea-6f69-4941-9824-2fda63a81a95

At the centre of Paradise is Harrison Gregory (played by Zorzut), a crackpot Elon Musk type who has built a rocket that will take passengers to Mars. This trip to Mars works as a framework through which we are introduced to a whole cast of characters in a series of interconnecting sketches, each with their own reasons to give up their lives on Earth and flee to the red planet. Every member of Trillcumber is given a chance to shine. Hannah’s incredibly boring man Bobby is a delight, and you truly feel for him by the end of the show. Tantau hilariously displays her musical chops as a convicted felon, and is an absolute highlight as a ghost-obsessed girlfriend. McCulloch is fantastically absurd and a little bittersweet as the narrator of the piece. Zorzut makes for a wonderful new addition to the Trillcumber team. His portrayal of Harrison Gregory is pitch-perfect, but it was his ridiculous appearance as a ghost that really got me laughing. It’s a well-rounded cast.

Though the overarching concept of jetting off to Mars is a distant fantasy, there is a deeper, more relatable theme of running away from your problems that is thoughtfully played with. Every character has a history to deal with and a lesson to learn. The narrative structure is interesting and shows some growth from Trillcumber as writers. It’s silly sketch that also manages to tug at your heartstrings.

Paradise is a terrific follow-up on last year’s debut from Trillcumber. If you’re after well-written sketch comedy from some accomplished young performers, it’s definitely a show worth checking out.

Trillcumber – Paradise is on at the Improv Conspiracy until April 17 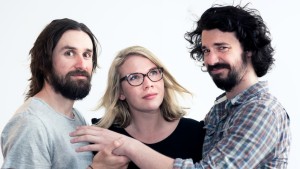 Have you ever been the uncomfortable one at a party, standing around the edges, not quite connecting with those around you?  If so, this is a show for you. Trillcumber (Simon McCulloch, Hayley Tantau and Mario Hannah) have composed a slick hour of sketch in Is This Intimacy?  As well as being terrifically funny, the show explores the awkwardness of relationships in their various forms, from first introductions to fraught romantic entanglements.

Trillcumber have created some wonderful characters in this show. Even in the more bizarre sketches, everything has a real, emotional base. You find yourself having sympathy for foxes and rooting for anthropomorphic planets. Tantau’s powerhouse of empowerment, Cindy Salmon, was a stand-out, aurally assaulting the audience with a combination of harsh feminist truths and even harsher air horn. McCulloch and Hannah’s performances as a serious actor and comedian-turned-serious actor starring together in a film were hilarious – a classic clash of drama and absurdity.

The sketches in Is This Intimacy? are filled with relationships that occupy a space of slight discomfort. They’re often a step shy from full-on conflict, characters swallowing their issues to keep the peace. Trillcumber deftly mine these social ineptitudes for laughs. The trio does a great job of highlighting how we all share something in feeling like outsiders, without coming across as preachy or smarmy. They have a strong rapport on stage, and their performances feel really natural. All three performers have previous experience with The Improv Conspiracy, and it shows – Is This Intimacy? is a very confident, polished first show for Trillcumber.

There’s great honesty in Is This Intimacy? Trillcumber present gloriously ridiculous scenarios, populated with characters that feel genuine. It’s sketch that brings together humour and heart.

Is This Intimacy? is on at The Improv Conspiracy – Theatre until September 25