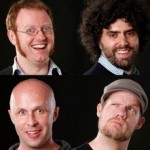 If the success of Big Bang Theory and the IT Crowd are anything to go by geek comedy is the New Black and there is a lot of it about during the Melbourne International Comedy Festival this year. Peer Revue is a comedy show by a group of science boffins who are out to convince comedy audiences that science is fun and funny. In fact they are backed by a CSIRO program called re- science  http://www.re-science.org.au.

The Venue is appropriately the elegant Kelvin Club, named for great physicist Lord Kelvin who has units of measurement named after him. There’s a lovely big painting of him in the performance space. The performers pay tribute to him at the beginning of the night in appropriately formal tones. They soon toss off their smoking jackets to don their ‘Hey kids! Science is really rad!’ personas. They are daggy and endearing and after all the silly intros each performer takes the stage in turn to share their particular scientific passion with us.

First up is one of the most famous faces in Melbourne Geek Comedy Ben McKenzie. Ben is involved in giving informative comedy tours of the Melbourne Museum and in the comedy Role Playing show The Dungeon Crawl amongst other things. For his portion of the show he has hit upon the intriguing idea of explaining the famously intimidating tome A Brief History of Time by physicist Stephen Hawkings. He begins by finding out how many people in the audience own the book (in our case one ) and how many people have actually read it (again one, but a different person). Ben then takes us through eleven chapters in the book and sums them up one by one using the briefest of amusing anecdotes. I can’t verify his accuracy but it was fun to watch what I assume were actual physicists who were nodding and laughing, even clapping enthusiastically, as he nailed each of Hawking’s theories. Everyone else had a good laugh and definitely ended up feeling a little bit
smarter after Ben’s section. I learned that Black Holes are ninjas & cool.

Simon Pampena was a big contrast in personality… to probably everyone in the room. He reminded me of Garden Guru Costa Georgiadis but his geek passion is maths with an enthusiasm that borders on the psychotic. He is quite shouty, which is a bit confronting in the genteel Kelvin Club, and I got the impression that his act was designed for performing in a pub or some such rowdy comedy venue. He had two major maths theories to explain to us and for the first one he used the Olympics medal tally. I could see that a pub crowd would be excited about sports statistics but the people around me were not that excited. He went on to explain Pythagoras’ Theorem involving triangles and his style went from aggressive to something a bit like Sam Simmons and I enjoyed it a lot more. He also had a fun PowerPoint presentation and had the audience rocking with laughter.

After a brief interval and sojourn to the bar it was time to learn about cephalopods from Trent McCarthy. It was described as ecology science but it was mostly silly stuff about octopi. His opening bit dressed as an octopus was cute but a bit of a let down to anyone who wasn’t in the front row, because we couldn’t see him. He either needs a higher stool or they should film him and show it on the screen. I also wanted to know more about his aunt’s historic survival of a box jellyfish sting and more fabulous wacky facts about cephalopods, but after a brief introduction to the mimic octopus he just went on to take some cheap shots at politicians. It did end well with a very successful and harmless bit of audience participation demonstrating cephalopod coitus that was a lot of fun.

Nicholas J Johnson was unsurprisingly the most charismatic of the performers of the night. As a former scammer, being inviting & charming is his stock in trade in the same way that in a geek it is generally not. His science was about psychology, human behaviour and hormones. His set relied heavily on audience participation and a camera was trained on his hands so everyone could see his close up magic. He did the old balls under cups routine and showed us how easy it is to trick the eye and mind with simple movements. It reminded me a little of Lawrence Leung, delightfully astonishing and a great crowd pleaser.

Although opening night was a little patchy, it is a fun night and would suit a group of friends with scientific tendencies who want lots of laughs with some learning. Considering the range of topics and the pizzazz of the performers I’m sure there would be something to enjoy for everyone.