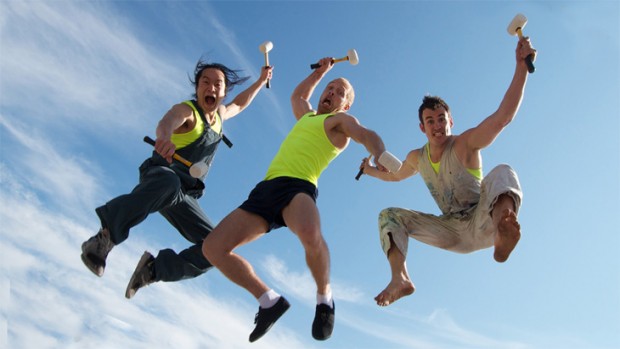 Three High Acrobatics (website) have marked their debut at the Melbourne International Comedy Festival with an extravagant hour-long show weaving in comedy with gravity-defying stunts.

This show contains a “tradie” theme with each of the performers dressed up as though they’d come straight from a work site.  In fact, the only thing missing was that they weren’t clutching 600ml bottles of coke and meat pies.

Containing a mix of acrobatics, juggling, and music, their comedic interplay had tinges of The Three Stooges feel to it which kept the multi-aged audience entertained throughout. Although most acts were performed with all on stage, each performer had their chance to show off their skills.

Ty: Making every woman’s dream entrance onto the bed with a rose planted in his teeth

Chris: His double ended broom act has to be seen to be believed. Wow.

Sam: The aerial which left the audience gasping and cringing.

For an acrobatics comedy show, they also displayed some clever show-writing skills regularly shifting the mood around at pace. For example, Sam gave a heartfelt rendition of Chris Franklin’s “Bloke” on his ukulele then they cut to a love-themed scene featuring acrobatics of an up-close and personal nature – all being tongue in cheek (no pun intended).

All three are experienced entertainers and their show has recently been run around the country at the Adelaide and Perth Fringe Festivals. For the vast majority, their humour is clean and clever meaning that the show would be suitable for all ages. The only down point of the show is that it’s located in Melbourne’s new ghost town (Docklands, near the busted wheel). However, if you’re able to get out there before their last show on the 20th April, an hour of laughs and hoping-he-doesn’t-drop-it will ensure.

Knock Off is on at the Wonderland Spiegeltent, Docklands
http://www.comedyfestival.com.au/2013/season/shows/knock-off-three-high-acrobatics