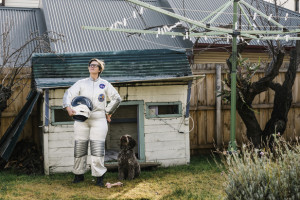 “No woe” is Hannah Gadsby’s mantra and go-to throwaway line in her latest MICF offering Dogmatic, a show she claims will boast her sunnier side. But this is still the Hannah Australia knows and loves, a comic known for being disarmingly funny while musing on such light fare as homophobic violence and depression. So even though Dogmatic, with its liberal sprinkling of gently funny anecdotes, pup videos and pop songs, marks something of a thematic departure for the comedian and actor, Hannah has still put plenty of her heart into the show, too. There are serious themes snuck in with the spoonful of sugar of her humour, enough to warrant the inclusion of Lifeline and BeyondBlue’s contact details on the big screen behind her for the second year in a row. And like in previous years, it’s the heart on Hannah’s sleeve that sets her apart; in a style reminiscent of American comedian Tig Notaro, she’s often at her best when juggling the heartbreaking and the hilarious.

Hannah’s admitted lack of commitment to staying merry is mirrored by Dogmatic’s always amusing but scattershot structure. It’s an enjoyable show throughout, certainly, and can be sort of divided into two acts loosely tied together with the aforementioned dog videos and a shoestring-budget reproduction of Taylor Swift’s 1989 tour. The first half sees Hannah mostly skirting around heavy drama to tell the kind of tales that are the bread and butter of stand-ups; run-ins with bizarre, conspiracy theory-believing American southerners, reminiscences of embarrassing but well-meaning parents, budding romances interrupted by misbehaving dogs. Even when not leaping over the bar of riotous hilarity she’s set in previous years, Dogmatic’s first half is engaging and consistently funny, and Hannah has an almost instinctive ability to provoke laughs with the slightest shimmy of her body or seemingly unimportant mutter. What’s also important is the person she reveals through these stories; a genuine outsider and underdog (d’you get it? underdog?) who learned to be funny to navigate her alien existence, and remained earnestly who she was until the world suddenly embraced her.

When the second half of the show begins, Hannah’s choice of stories become crystal clear, as is the constant ghostly presence of Taylor Swift via song. During this closing act, Hannah expertly blurs stand-up with a kind of withering social studies lecture, as she deconstructs Taylor’s persona and status as pop’s most ubiquitous and irritatingly untouchable figure. Now established as a genuine outsider, Hannah punctures the more dubious outsider-turned-feminist-hero bubble that insulates Taylor from any criticism with such intelligent precision that she never resorts to insulting the woman. This portion of the show was not where the biggest laughs came, but it was its most interesting and brave moment (come on, have you seen what those Swifties and Beliebers are like on the internet?). With Dogmatic, Hannah Gadsby proves she’s not willing to rest on the laurels her deeply personal, heartfelt comedy has earned her; she’s turning her gaze outward and investigating the world with the same thoughtfulness, and ruthlessness.