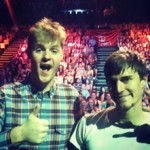 Now in it’s third year, Triple J rolled into the Melbourne Town Hall with 1200 of their closest friends for the annual “Good Az Friday” Outside broadcast.

Young songstress Lisa Mitchell performed a couple of songs including a fantastic cover of M83’s Midnight City (sorry oldies, that’s a hip song the young people are down with) for regular Triple J segment “Like a Version”. The day accumulated with another Triple J tradition, a massive Friday Dance Off, which saw the Melbourne Town Hall jumping to the beats of Skrillex (more young people stuff). All in all a whole lot of fun and a great showcase to get those young folks out and seeing live comedy!

If you weren’t there, or missed it on the radio, you can hear everything i just told you here!