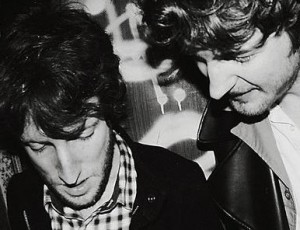 Billed as a two hander sketch show, A Very Zac and Gotchy (starring Zac Cooper and Matt Gotch) was an exuberant hour by two young actors. This basic set up was quickly abandoned with a nudge and a wink to include Caitlin McInnis in all the female roles.

The humour was a little hit and miss at times but that is generally the case with all sketch shows. I found that it started off with scenes that were silly for silliness sake and relied a little too heavily on mugging to get the laughs. As the show went on, some interesting ideas began to emerge and the consistency of the laughs increased. Personal highlights included a reluctant verbatim performance of a comedy routine that hadn’t aged particularly well and the Hollywood artistic licence taken with a Stephen Hawking biopic.

All the performers played everything extremely broadly which was in keeping with the artificial sitcom styled setting. This initially put me off-side (as it seemed to be at the expense of amusing content) but it did suit the majority of the sketches where surrealism and absurdist lines were the order of the day. Some touches of ironic misogyny, outrageous lines and costuming, and fun with literal misunderstandings tickled our funny bones.

With the main focus usually being on the relationship between “Zac” and “Matt” (or a myriad of other character pairings), they often took on the traditional roles of comedic duo with Gotchy being outwitted by the controlling and manipulative Zac to provide plenty of amusing conflict and twisted wordplay. Matt did manage to add a little subtlety in the unhinged nature of some of his characters but generally they were played with wild abandon and extreme silliness.

They had very apt choices of music between scenes which tied in with the theme explored in the preceding sketches. This made for some grins and titters as the audience heard how they cleverly tied things together. Sometimes the audio happened to be the exact source material used in the sketch to fill the gaps for those unfamiliar with the references. This was useful but perhaps it was used a touch too late to effectively garner laughs from everyone in the room.

Staging this performance in a white cube art gallery helped with the heightened sense of reality. The bright stage lights lit the whole room and gave the performers a slight unworldly look. Artwork hanging in the walls didn’t quite fit with the scenes and made this strange world of strange people all the more weirder.

A fascinating take on the traditional sketch show.

A Very Zac & Gotchy is on at Brunswick St Gallery until September 28.
http://www.melbournefringe.com.au/fringe-festival/show/a-very-zac-gotchy/