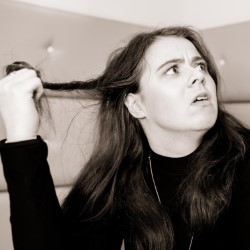 Ah, the danger of having to think up your show title in January. We may not get a sketch show from Mary Flanigan but we do see some solid and hilarious stand up. Mary is a Catholic from Belfast, who now resides in Birmingham.

She is playing in a karaoke bar in a basement. The room has a padded bench seat running round three of the walls and very uncomfortable little benches in the centre so I recommend getting there very early as the benches on the walls are prime real estate. The room is not much larger than a king sized bed, yet we managed to fit nearly 30 audience members and one comedian in. This is quite an intimate experience.

Mary gives us just under 45 minutes of stand-up comedy gold. She talks about the joys of online dating, being Irish, being a Catholic (and all that lovely guilt), being single, her exciting job and much more. There is some swearing (of course), but this shouldn’t offend anyone and you’d be a fool to miss this show. In fact, the show was so popular that people were being turned away on day two. If she doesn’t have a bigger room by next week, there is something wrong.

Everyone Dropped Out of my Sketch Troupe is on at Laughing Horse @ City Cafe until August 13
https://tickets.edfringe.com/whats-on/everyone-dropped-out-of-my-sketch-troupe