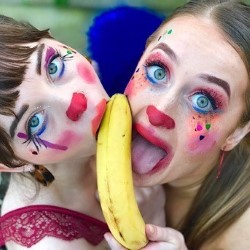 2 Clowns 1 Cup starts off quietly, as one of the clowns is being security guard, keeping the audience away from a large red button with Do Not Press. No surprises what happens when the other clown arrives.

2 Clowns 1 Cup was an entertaining hour of education and high energy dances and slapstick routines, with some silly jokes and sneaky water pistols. The audience thoroughly enjoyed the hijinks, as the applause at the end demonstrated and I would definitely recommend the show for questioning young adults or anyone who enjoys a good co-ordinated dance routine with a comedy overlay. Sadly the dreadful name of the show might put some off but it’s actually surprisingly good. Recommended.

2 Clowns 1 Cup is on at Greenside @ Infirmary Street until August 17
https://tickets.edfringe.com/whats-on/2-clowns-1-cup