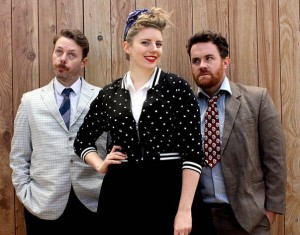 At the tail end of the golden age of radio, the Radio Variety Hour soldiers on. We were privy to the back stage / off-mic banter between the cast (bickering about the onset of television) and saw them transform to all smiles once the microphones were switch on. The looming domination of the cathode ray tube gave them the opportunity to make some jokes about modern day technologies and the arguing was the basis for a subplot involving the cast’s lives away from the studio. The main focus of the show was the radio show segments with their hilariously out-dated sponsorship announcements, amusingly antiquated moralities and some good old fashioned audio drama with plenty of laughs thrown in.

It was interesting to see that they didn’t employ a dedicated person to franticly generate the foley, instead each actor took turns in using the props to bring the stories to life. Popped balloons, punched lettuce and tin can echoes added to a pre-recorded soundtrack to tell these hilarious stories in a fun, chaotic manner. We even got laughs when devices didn’t make the appropriate noise and the performer attempted to explain it away.

The script was witty with charming period phrasing and amusing word play. It was fun to see the cast throw in left-field comments, not necessarily to make the others corpse but to cover mistakes. These minor errors would have passed by the audience unnoticed if they hadn’t drawn attention to them but they added some extra lunacy nonetheless. There was the odd stifled giggle but they were able to recover quickly and dive straight back into the script. All were very expressive in their radio performances both vocally and physically, and even included the odd visual joke for the in-studio audience.

We laughed, we cheered and were regularly on the edge of our seats. This was a fun hour of nostalgia with brilliantly constructed stories to enthrall all ages.

Radio Variety Hour is on at the Lithuanian Club until October 5
http://www.melbournefringe.com.au/fringe-festival/show/radio-variety-hour/