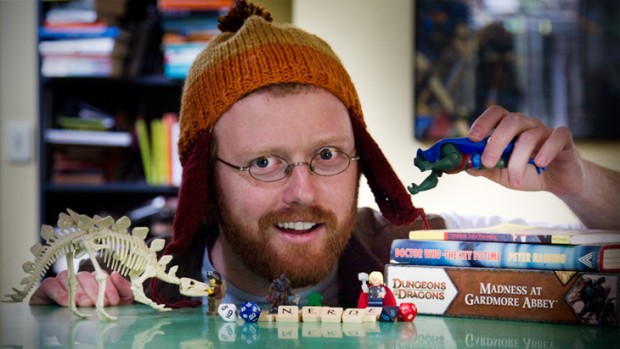 Co-runner and creator of D&D-style comedy show Dungeon Crawl, Ben McKenzie has a new show at this year’s Melbourne Comedy Festival. Titled Ben McKenzie Is Uncool it explores Ben’s life on the outside of the mainstream of culture and the ways in which this manifests itself.

Ben appears on stage clad in a green hooded robe like some ancient ritualist come to recite eldritch incantations from the books he carries that will summon forth demons from the very pit of Hell itself to torment our souls. When those books are then shown to be an old Target novelisation of Doctor Who, a Dungeons and Dragons rule book, and a Dalek Technical Manual, the audience’s fears are assuaged.

In order for us to find out precisely why it is that Ben is uncool, he first has to define that which is cool and this proves a mite tricky. So the audience is taken on a journey through adventures in school being chased by bullies and pretending they are evil aliens to his Doctor; defining himself as a feminist much to the confusion and consternation of many men he knows and a few women; watching crap British sci-fi before it got cool again, and just being ginger.

Along the way he elicits laughs by turning the show into a Choose Your Own Adventure and has audience members select cards from a stack with prepared segments printed on them. This ensures that no two shows are ever likely to be exactly the same. This is an inspired idea and fits perfectly with his overall theme.

So it is that the room hears Ben extol the virtues of drinking tea, playing board games (except Monopoly), warn of the dangers of time travel and give them his impression of a mad scientist – which, as a Scientist myself, was pretty spot-on.

McKenzie is a confident and affable performer who radiates warmth and inclusiveness to the room and the audience were held rapt by his every word. There was an appreciably large crowd present which lent the show a lot of good energy for Ben to draw on.

This is a very funny show from a very professional performer and ideal for those who know their Bat’leth from their Lightsabre.

Uncool is on at The Provincial Hotel until April 20
http://www.comedyfestival.com.au/2014/season/shows/uncool-ben-mckenzie-is