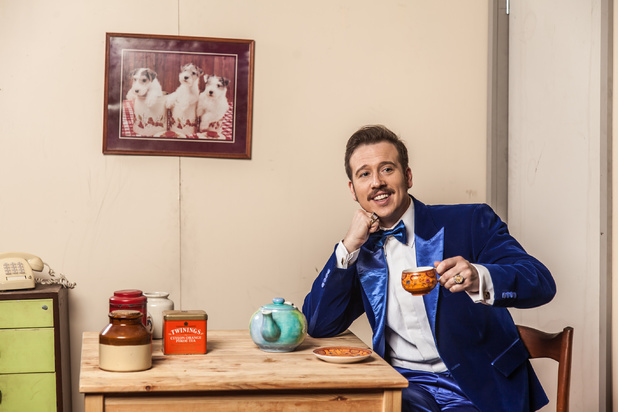 Sporting an electric blue velvet 2 piece suit, a debonair smile, matching cufflinks and more than one copy of his recently released album ‘Warming up the pipes’ Clark delivers us a dash of piping hot Las Vegas smarm. Er, charm.

Clark’s act evokes the laughter of awkwardness as he pauses after each gag to reflect on his humour with a chuckle to himself. The man’s face is a theme park of expressions; he could sign for his own show just using his eyebrows. Clark will show you how to double take a double take. More than once.

Clark pushes stereotypes of the great crooners such as Tom Jones and Elvis to new and uncomfortable levels; burying us in another era, as he sets the mood of each song with his disco ball and cheeky one liners. You’ll be inculcated in a world of cocktail parties, holidays to Acapulco, long lost romances and sweet love ballads. Perhaps more than a little self-assured of just how much charisma he is packing Clark tiptoes the line indelicately between charming and downright creepy. The result evokes no few squawks of laughter from the audience.

Clark’s rather exquisite guitar chops emerge half way through the performance. When he really lets loose in song it is a truly pleasurable experience, I forgot to feel uncomfortable for a good five minutes or so.

This isn’t a show for the shy audience member; you may very well receive a full frontal assault of Clark’s particular brand of charm. Things can get uncomfortably intimate. The doors may be locked during the performance. You’ve been warned. Characterful comedy with class and charisma on the rocks.