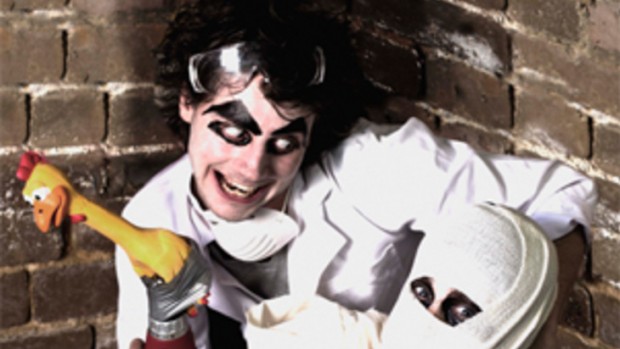 A frustrated vampire (Howard), a suicidal ghost (Phillip), a brain dead mummy (Adio) and a kooky mad professor were the housemates in the titular Manor. All was idyllic until the arrival of an inspector from the council. Faced with the demolition of their home, this unlikely group had to band together and get the place in order whilst all manner of wackiness ensued. It was almost like a sitcom version of the TV series Being Human with less bloodshed.

The majority of the humour came from the stupid behaviour of the various ghouls and freaks. All displayed hilarious witlessness which was a joy to watch. The character of Howard mostly played the straight man, with a wonderful Nick Cadaye-esque grumpiness, but he occasionally got to shine comedically when ineptly interacting with humans. Overall the script was fairly solid even though it didn’t have rapid fire laughs often demanded by a comedy festival audience. Things often got bogged down with exposition which created some quiet patches, but there was always the anticipation of more stupidity around the corner to keep you interested.

Towards the end things started to get meta as the character’s reality started to break down. We saw the narrator go rogue, Howard trying and failing to explain some large plot holes, a minor character suffering an identity crisis and an admittance of inaccuracy in the show’s advertising blurb. These were very clever and amusing ways of subverting theatrical conventions that added to the anarchy of the piece.

Minor characters were introduced throughout the show and, with only four cast members switching between the roles, it almost became difficult to keep track of them all. Most of these bit players existed only for a single joke that had a tenuous link to the plot. Considerable effort was made in costuming and voicework for these beings, perhaps more than they really deserved. The cast did a wonderful job in their portrayal of all these eccentric creatures, hamming it up and exaggerating every gesture.

The staging of the show was impressive with dramatic lighting and gorgeous shadow puppetry used in the introduction and linking between scenes. Some scenes even took place entirely behind the large screen, giving an otherworldly atmosphere to scenarios exploring the mundane. There were often delays in transitioning from one scene to the next but considering the small cast and their ambitious staging, this was inevitable. Congratulations to the cast for creating this wonderfully absurd comedic play.

The Inspection of Stanley Manor is on at The 86 until April 19
http://www.comedyfestival.com.au/2014/season/shows/the-inspection-of-stanley-manor-the-bathtub-grin