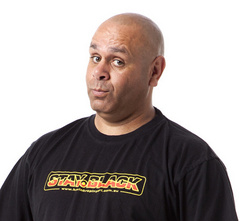 At the top of his MICF debut, Kevin Kropinyeri explained that he usually plays to predominantly Indigenous audiences and this was his first extended run of playing to mixed crowds. This forced him to add side notes to his regular material so that broader audiences would get the references. He pulled it all off with ease, making this a fascinating and hilarious primer into Aboriginal humour.

Observational material made up the bulk of Kevin’s set which focused on his immediate family and the extended family that comes from being part of a Mob. From his experiences living in various small towns to performing for the Elders, he told tales that could only happen in the Indigenous community. Some silly wordplay was given a nice twist with the various dialects at his disposal. Wonderfully expressive impersonations of various characters from his adventures and exaggerated physical parodies brought the jokes to life. He oozed confidence and cool attitude on stage which was a delight to watch.

The Aboriginal people in the audience howled with the laughter of recognition as they saw characters that they were familiar with and roared with delight at Koori centric concepts. This meant that explanation was often required so that the rest of us could follow the action. Even with the translation delay it was impossible to feel any frustration with not being immediately in on the joke with a performer as charismatic as Kevin.

Kevin makes fun of every Aboriginal stereotype in his act along similar lines to other ethnic humours. This made him susceptible to knee jerk reactions from well meaning Whities about reinforcing those views but he counters it with the argument “we’ve been laughing at ourselves for centuries”. Although he gave us permission to laugh by instructing us to ‘follow the lead of the Blackfellas in the audience’, there is still that small hurdle of guilt to navigate. The light-hearted nature of the show certainly helped us to make the jump.

Those familiar with Kevin’s work would find this the expected hour of solid stand up in the hands of a consummate performer. Everyone else will learn a great deal about another culture to boot. With only one expletive uttered (entirely understandable while tackling a topic that riled him up), it’s a show that anyone can enjoy.

Guess Who? is on at the Backstage Room at the Melbourne Town Hall