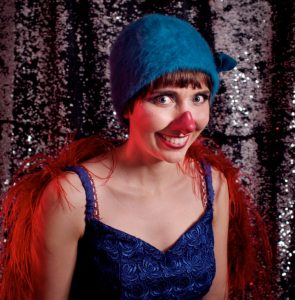 In a world where danger lurks around every corner, Elizabeth Davie has her clown Lucretia Mackintosh to do the things that she can’t. This dark performance verged on a rather extreme form of Radical Feminism, playing out revenge fantasies as a form of catharsis with plenty of gallows humour.

The clown is a classic device used to say and do the forbidden and wow does Lucretia do that. She was an intriguing character – fairly disarming initially with a timid demeanour and a child-like desire to play, but once the red mist descended she was quite a demented being. Action hero styled quips after an altercation regularly raised the laughter level above nervous titters giving the audience some welcome relief following a gruesome mime.

The inclusion of an excerpt from King Lear was an interesting way of providing some background into Lucretia’s creation but digging deeper doesn’t really reveal any deeper meaning. Lear’s fool was a voice of reason while Davie’s clown was an outlet (an empowering but potentially dangerous one) so the reference seemed to just serve as an explanation as to how she became desensitized to violence.

The deliberate pacing and repetition (with only changes to the triggering comments) made watching this a bit of a slog but I could see the reasoning behind this structure. We saw variations of the same act play out over and over to reflect that violence against women happens with shocking regularity.

Aside from Lucretia telling a child to “not to play by all the rules”, I was disappointed that this show didn’t seem to do anything beyond being fed up with being under constant attack from unwanted male attention and the secret desire for revenge. It was focused on shouting at the world about the injustice and giving us a slightly perverse delight in seeing the traditional predators getting their comeuppance.

Apex Predator is a worthy addition to the Fringe and despite the seriousness of this topic delivered enough dark laughs to satisfy. It’s also worth seeing to help Davies donate to the organisation Wire Women’s Information (https://www.wire.org.au/).

Apex Predator is on at Trades Hall until September 29
https://melbournefringe.com.au/event/apex-predator/