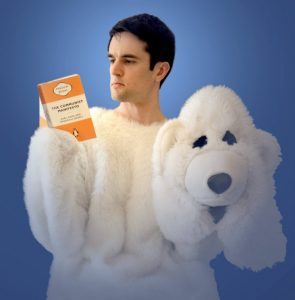 When the performer personally knows the names of every audience member within the first five minutes of a show, you know you’re in a small audience. And that was certainly the case on this particular Tuesday night at the Melbourne Fringe. It’s a shame, because Pay McCaffrie is worth listening to.

McCaffrie is something of a rising star in political comedy. His clever, pithy observations have earnt him a seat in the writing room of Mad As Hell, along with other satirical programs. There is nothing to indicate he would be out of place there.

To attempt satire – especially political satire – you first need something to say. “Write about what you know”. And McCaffrie certainly has plenty to draw from. Growing up as a young gay man in the Catholic education system in Adelaide gives him plenty of material to reflect on – and as a reformed law student, he has the ability to find exactly the right word, and use it to its fullest effect.

But basing your shtick on political observations can have its downsides. It’s not everyone’s cup of tea, as McCaffrie found out on a recent comedy tour of regional NSW and Victoria. He delights in telling stories of how his well honed observations relating to the recent federal election utterly failed to capture the imagination of some in the more insular communities. He riffs freely about the uber-dinkum Daggy Dad image that the current PM is promoting, freedom of religion, environmental issues, as well as Australia’s position in international politics. What’s not to love?

His style is erudite and charming, without crossing over into smugness or pomposity. There’s a warmth in his engagement with the audience, and an instant likeability – probably more to those who lean to the progressive side of the political ledger.

If you’re going looking for polar bears, you may be disappointed. But if you’re looking for an incisive, informed, very funny look at Australian politics, from a new and exciting voice in satire, this could be a great way to round out your evening at the Fringe.

Politics and Polar Bears (There Are Still No Polar Bears) is playing at Trades Hall – Evatt Room until 29 September 29
https://melbournefringe.com.au/event/pat-mccaffrie-politics-and-polar-bears-there-are-still-no-polar-bears/