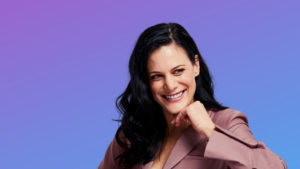 Alex Jae’s show has a Great opening using the famous movie intro: ‘In a World’….. Something that no doubt goes down a storm with fans of her podcast “The Ladies Guide to Dude Cinema”. I wish this show was more about that. She and the title suggest No Sorry, You Go, is about having anxiety but maybe she was too anxious to delve into it because it turned out to be a fairly light and amusing skip through Alex’s life as an unmarried woman in her 30s.

Alex briefly mentions being single in lockdown with her cat but her cat isn’t given a name or any cute stories, it’s just used to joke that she’s worried she might be some kind of clichéd single cat lady. But she never seems to be far from having a boyfriend. This is Alex’s only hint at the pandemic, she’d rather forget about all that nonsense, why don’t we have a fun night talking about Ladies Things?

The relationship standup feels a bit tired at times but I am an old married lady and this is material for singles in their 30s to relate to. She says she loves being single more than once, but has no great jokes about it and spends most of her time talking about annoying her boyfriend and her annoying exes. There are hints at family discord, but she doesn’t seem to ever really relax on stage and open up about herself.

The topic of Anxiety really only pops up in the show occasionally and it feels tacked on to an otherwise lively show. A fine Melbourne International Comedy Festival Tradition. She asks the audience to imagine she’s written a great ending to fit her theme, but it only adds to the impression that she is trying to add gravitas because it’s expected.

If you’re looking for right on feminist, topical or quirky standup, this is not your show. Alex is doing that mainstream, dick obsessed type stand up and if that’s your thing, grab some wines and take your girlfriends (esp if you’re doing a hens night) for a titillating fun time.

No Sorry, You Go is on at the Imperial Hotel until April 4
https://www.comedyfestival.com.au/2021/shows/alex-jae