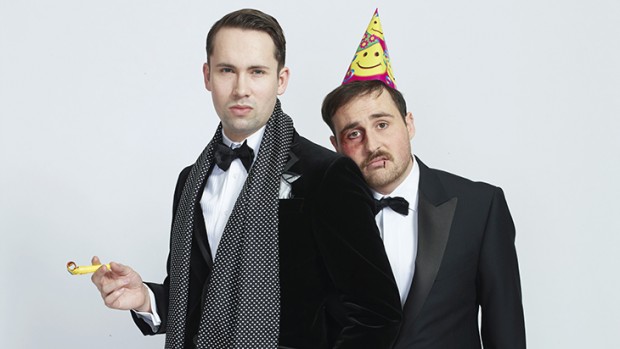 Max and Ivan are the class of 2004, thrust mercilessly into the same room again after ten years of regrets, grudges and lost memories at their reunion. This critically acclaimed pair from the UK wowed audiences at last year’s MICF, walking away with a Barry nomination as well as a Foster’s Edinburgh Comedy Award nomination in 2013.

The audience furiously held on for dear life as we simultaneously encountered the class of 2004 in 2004 and 2014. The story spirals ever closer to the precarious edge of chaos as multiple characters become ever more entangled, undergo flash backs, confrontations, doubts, glories, and seek retribution. A cast of at least twenty exquisite characters are played by Max and Ivan, leaping erratically from one character to the next and back again. The encounters become ever more crazy and hilarious ’til two characters played by the same man enact a marriage proposal.

We meet the archetypes present in every school year; Brian – who is essentially allergic to life. We meet Jessica, his long-held and never confessed love. We meet the bully, the geography teacher, the canteen lady, and Jonathan Jones; the student who no one remembers, despite having leapt from the science block. Twice.

The duo combine the best of sketch, slapstick, songs and story telling at high speed and high volume. The writing is brilliant, packed full of twists, turns, and escaped zoo animals. The performance bounced off the back of the theatre. While sweat poured forth from the performers they never displayed the exhaustion they must have been feeling. It was exhausting just watching them. Some fantastically executed audience participation was also a highlight of the night.

Fun, furiously paced and fundamentally silly, there’s few who wouldn’t love this performance. Already playing to packed rooms so get a ticket before there’s none left.

The Reunion is on at the Melb Town Hall – Powder Room until April 20
http://www.comedyfestival.com.au/2014/season/shows/the-reunion-max-ivan