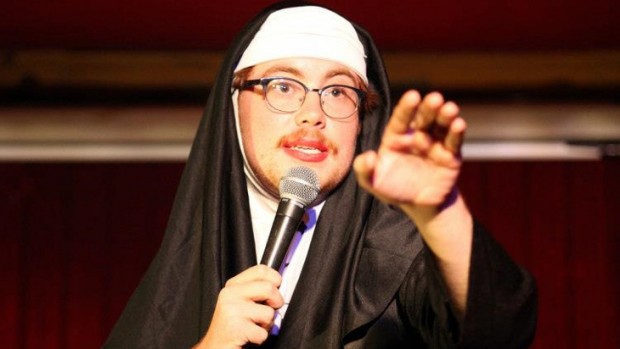 A Chinese girl rises to the top of a Mexican drug cartel, goes on to dominate the professional Monopoly championships and finds God. It’s a story you’ve probably heard a million times before but Sister James McCann tells us her version. Whether it delivers on the promised Monopoly coaching or liturgical discussions is up for debate.

This was wacky, shouty comedy at its best; a high energy performance with a hint of danger. It had the hallmarks of an Evangelical Salvation Show but the subject matter hinted at otherwise. Sister McCann flirted with gents in the audience, posed tricky Monopoly scenarios and even belted out some tunes on the Piano Accordion (the instrument of choice of Monopoly champions).

The story itself is one hell of a wild ride. McCann totally nails this self described picaresque tale. It ticks all the boxes of the genre and includes lashings of surrealism, highbrow cultural references and crazy encounters with thinly disguised celebrities. There were some clever call backs both visually, verbally and musically. A rendition of a well known song in mangled Spanish was a particular highlight.

The performance was rather rough around the edges with numerous distractions and fluffed lines but this fitted in perfectly with this odd character. With such a crazy logic behind the story, anything was likely to happen and frequently did. This show has had runs previously at the Adelaide Fringe but McCann still made it appear off the cuff.

Her interactions with the audience were a little hit and miss. Most prompts for suggestions were merely fishing for replies to match pre written comebacks but her rapport with the punters was a lot of fun.

If you enjoyed the zany, over the top characters and humour of Wolf Creek: The Musical (McCann co-wrote that masterpiece) you know what to expect. This is some great crazy fun to cap off your evening at the festival.

Nunopoly is on at Trades Hall – The Evatt Room until April 19
http://www.comedyfestival.com.au/2014/season/shows/nunopoly-how-to-play-winning-monopoly-and-live-a-fulfilling-life-in-christ-james-mccann