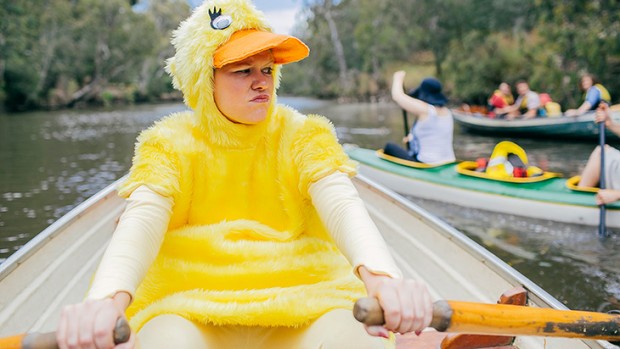 McLennan quickly disarms her audience with a big, bright smile and a charming persona. McLennan feels like a friend within minutes of the show getting underway.

Kate initiated discussion by obeying the mandatory ruling that a female comedian must state her age, marital status and whether or not she has kids before the audience, like some sort of societal trial by jury. But luckily she carried the conversation into far more interesting directions and critically analysed the structures which dictate this social obsession. McLennan talks of the women who perpetuate the idea that success and fulfilment is solely governed by these attributes. She talks about her personal relationship with these pressures; on one hand rejecting them, another questioning them, and the struggle not to internalise other people’s expectations.

McLennan is a competent story teller. She builds a robust picture for us of her mother and father, both endearingly mad in their own way, and the experience of growing up in Mortlake in regional Victoria. McLennan speaks to a rugged Australian upbringing dressed in overalls, bikie adventures, secret clubs and trips to the tip. She speaks of failed family holidays and turning out okay despite the laissez fare approach her parents took to parenting, which was more the norm of the 80’s. McLennan’s masterful telling makes many of the themes of her stories of her family’s interactions recognisable to the audience, particularly the slightly dysfunctional way families deal with the harsher realities of illness or misfortune.

McLennan is confident enough to play with the audience a little bit, leading us down one narrative before revealing she’d made it up then taking us off somewhere else. She builds our trust enough that we can forgive her for letting us invest in a fictional account.

The mischievous and warm McLennan is more together than she lets on. This was a truly pleasurable hour with a surprise or two in store at the end.

The Duck’s Nuts is on at Melb Town Hall – Lunch Room until April 20
http://www.comedyfestival.com.au/2014/season/shows/the-duck-s-nuts-kate-mclennan