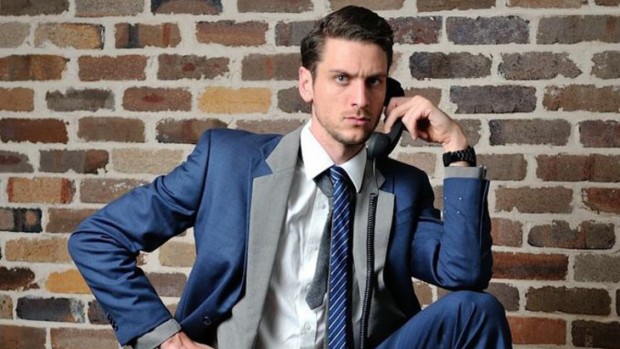 Steen Raskopolous has got a lot of people up his sleeve – a Greek Orthodox minister, an unstoppable businessman and a champion athlete among them. I’m Wearing Two Suits Because I Mean Business might be billed as a solo sketch show, but you soon learn these sketches are a lot more collaborative than that implies.

Raskopolous won Best Newcomer at last year’s Sydney Comedy Festival and you can see here that it was well-earned. The characters in I’m Wearing Two Suits… are deftly created and feel fully developed, even when we don’t see them for long. Raskopolous’ business man, Toby Zegamo, is brimming with confidence and 1970s chic. A sketch about Zegamo’s son at a basketball game was so well-realised that the audience audibly felt sorry for him. The sketches are quick-witted, silly and often absurd.

I’m Wearing Two Suits… is an audience participation-heavy show. Regardless of where you are sitting, the odds are good that you will be up on stage at some point in proceedings. This really isn’t something to fear, though. Unlike acts such as Jason Byrne, the embarrassment of the participant is never the punchline of the joke. Audience members are being invited to join in the fun by interacting with Raskopolous’ characters, whether it’s helping to tell a ghost story or sitting down for a job interview. If you’ve never been a fan of audience participation, this is a show that could change your mind.

I’m Wearing Two Suits… is a sketch show unlike any other. Raskopolous brings an infectious energy to the stage that makes it impossible to leave without a massive grin on your face. Business never stops and neither do the laughs.

I’m Wearing Two Suits Because I Mean Business is on at the Portland Hotel – Gold Room until April 20
http://www.comedyfestival.com.au/2014/season/shows/i-m-wearing-two-suits-because-i-mean-business-steen-raskopoulos