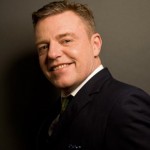 There’s nothing new in ex pop star icons performing nostalgic, autobiographical cabaret, but it does feel weird that a pop star from my generation is doing it. It was hard not to feel a bit old sitting in the middle-aged crowd and a bit apprehensive about what to expect. The show is in the comedy section of the Fringe guide, which seems promising, though in a music venue. (Unlike David Hasselhoff who is listed in the music section yet at a comedy venue.)

I needn’t have been so anxious as Suggs, frontman of early 80s ska band Madness, is a charismatic showman with impressive storytelling skills. Not so surprising when you think about the word picture stories he created singing songs like Baggy Trousers, Our House and House of Fun (hmm why ever was this not chosen as a song sung on the roof of Buckingham Palace???). Suggs used songs from Madness and others that influenced him to help illustrate his tale, which were used sparingly and effectively. It is also delightful to hear that Suggs still has a tuneful singing voice.

Suggs takes us on a colourful journey evoking detailed images of places he grew up, in Soho and Camden in London describing shops and streetscapes and the people he sees and meets there including gangs, friends and neighbourhood characters. For some in the audience it was a reminder of their own youth in these places for the rest of us it was a fascinating tour of a world we know only from music clips and movies. Framed by a sort of ‘Who Do You Think You Are’ search for information about his Jazz singing father who abandoned the family when Suggs was three. We also learn how he was abandoned by his mum to live in country Wales with his cousins for a few years, then came back to London and joined a band that would later become Madness. His time with Madness is covered in detailed, but pop fame seems such a brief, bright spark in a long and colourful life.

Madness has reformed and it’s a pity the show doesn’t cover their recent triumphant performances at the Olympics and on the roof of Buckingham Palace for Her Maj, but this is a tightly scripted performance and maybe they’ll be kept for a sequel. It’s also impressive that Suggs seems to maintain a fairly stable home life with his wife of thirty years and two daughters who are starting to perform music. I do feel however that there is something missing, considering his own father’s problems, when he ignores his own darker side with alcohol etc, after incidents that have made the papers. Still maybe they were aberrations and this is a comedy, despite some dark issues, it’s kept pretty light and is very funny throughout. In fact the mood and style of the show perfectly mirrors the mood and style of songs sung by Madness and his true life stories certainly bring the lyrics to life. This is a must see for fans of Madness, but you could safely take someone who has never heard of band and they would still have a brilliant time in the company of the charming and eloquent survivor that is Suggs.

Suggs is on at Queens Hall
ttp://www.edfringe.com/whats-on/comedy/suggs-my-life-story-in-words-and-music
h