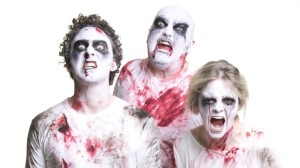 Fear is the Mind Killer. Fear can cripple people from living their life with freedom and joy. Two years ago Melbourne Comedy Festival Stalwarts Watson put on a horror comedy show in the historical and genuinely creepy Melbourne Gaol. Anyone who went will never forget all the hilarious and terrifying hijinx that took place in that Gaol. It will no doubt go down in Festival history as one of the best things ever put on at the festival. This year, Watson’ Go To Hell connects through to that show but taking us to the even deeper, darker places in between the two that are the inspiration for this show.

Watson have always loved to play act movies for us and here they get to play out some famous horror film scenes for laughs, but this isn’t the bulk of the show. It’s just part of the whole exploration of fear and links back to a more innocent time for Watson. Things have changed.

Like going to a Horror Movie, from the title and poster of Go To Hell you know you’re in for something scary when you’re seated in the Beckett Theatre but you don’t know what or how. The stage is a big empty black space and the audience doesn’t know when or if anyone will appear behind them or above them or next to them. At least you have the reassurance of being in the safe hands of the endearing and funny Watson crew who will guide you on this rollercoaster ride of a show and bring you through the other side.

The surround sound soundscape is visceral and the original music spine tingling. Director Steven Gates did not create the soundscape, it was created by Gillian Lever but he was obviously a big influence on its existence, he did design the soundscape for Inside with Frank Woodley & Simon Yates and I remember it blew me away.

I can’t tell you about the crux of the show, you’re going to have to find that out for yourself. But you know those sorts of comedy shows that have you crying with laughter then crying with empathy, ‘til it all gets mixed up? You know the sort of show that critics love? This is one of those shows. I loved it.

Go To Hell! is on at The Malthouse Theatre until April 23
https://www.comedyfestival.com.au/2017/shows/go-to-hell