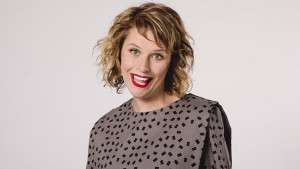 Anne Edmonds has been killing it lately. Coming off a Director’s Choice win and a Barry nomination at last year’s MICF, she continues her run of strong work with No Offence, None Taken – a brilliant hour of stand-up about family, relationships and men.

At the centre of No Offence, None Taken is a holiday Edmonds took with a friend. Left stranded on an island due to inclement weather, Edmonds spends the day venting at her mate. It’s a simple, clever device that allows Edmonds to move from story to story with ease, and cover a diverse range of topics.

There’s something deeply familiar in all of Edmonds’ tales. They paint a picture of Australia that’s a bit crusty and weird. There’s the creepy family running a business where Edmonds had her first job. There’s the hypermasculine dad at a caravan park who isn’t quite as good as he thinks he is. If you’re not a bit dysfunctional, you’re the weird one in Edmonds’ world, and it’s a sentiment that rings very true.

Edmonds is a brilliant performer and brings characters to life in a very vivid manner. Her stand-up is enhanced by her ability to slip into the voices and mannerisms of everyone she talks about. It really rounds out these people, making them more sympathetic than if they were simply a punch-line told in Edmonds’ own voice. And, more importantly, her impersonations are also utterly hilarious . A section in which Edmonds performed as a shoe saleswoman was a particular highlight that had the audience in stitches.

No Offence, None Taken is a must-see for lovers of stand-up. Anne Edmonds gets better with every passing year.

No Offence, None Taken is on at the Victoria Hotel Banquet Room until April 23
https://www.comedyfestival.com.au/2017/shows/anne-edmonds