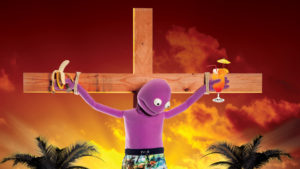 Sammy J and Randy have put on some amazing Festival shows both together and apart. Their solo shows really are different beasts. Randy’s shows are still hilarious and full of surprises, but they tend to be more soulful and philosophising about life with the odd whimsical touch.

Anti-Crisis was a show born out of illness from last year. Some of you may remember that the majority of the run of Sammy J & RandyLand had to be cancelled. Randy had a bit of a rough year and plenty of time to lay in bed wondering what it is all about. He’s discovered the religion of Berylism and is high up on a huge pulpit sharing his revelations using the Big Book of Beryl, the text of an intergalactic missionary.

A show that quiety explores faith is appropriate through the Easter season but it’s about much more. Beryl’s theory of creation happens to mostly coincide with modern scientists, except that it is also pretty silly and depicted through stunning back projection and shadow puppetry. Randy always loves to surprise and awe his audiences with big prop change revelations and there is a good one here.

Here is the spot where I must say that Randy, the comedian is a puppet. You will be a little hard pressed to find out the name of the puppeteer. I know because I’ve been a fan from the beginning. His name is never on any of the Festival advertising and it was nowhere to be found in the Ricketts Lane credits or on the ABC site (though a bit of further research helps). Randy truly has attained fame as a standup comedian in his own right. Anti-Crisis plays with this somewhat and has fun teasing us with possible peaks behind the curtain.

If there is one thing that you can count on, it’s that Randy will always put on a fabulous show, with shrewd and witty insights, hilarious jokes and magical surprises. He will never stop being that foul mouthed puppet we love, but his solo shows have more depth and warmth than you might be expecting. Highly recommended, as always.

Randy’s Anti-Crisis is on at Melbourne Town Hall – Supper Room until April 14
https://www.comedyfestival.com.au/2018/shows/anti-crisis