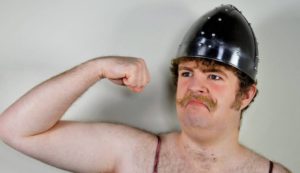 The blurb for Straight White Knight promised so much. John the Knight was going to “slay privilege, rescue nonbinary royalty, and escape the chokehold of toxic masculinity.” What we got was a socially inept man-child beating his head against a wall with misguided attempts to woo a woman. There’s the possibility that Oliver Cowen was trying convey deeper meaning through symbolism but I certainly didn’t pick up on it.

Groundhog Day loomed large in this performance with our hero going through his daily routine, day after day after day, while trying different techniques to woo a lover while his dreams were haunted by a sinister bear that ridiculed him. Things rapidly broke down and the routines went to shit as John got frustrated. Increasingly gross stunts were performed to repulse and garner laughs at their inappropriateness, but the stakes didn’t increase and there was no character growth. Even though this knight finally found love, it was unclear how he achieved it and why.

Cowen’s silent clowning act was a bit of a shambolic performance that suited the character perfectly. His fumbling for props and stomping around like a needy toddler was amusing enough but the repetition of it did get a bit tiresome. The anticipation of what he would do next was enough to maintain our interest but you had to get through a lot of OCD routines to get there. This act became more like a duration performance art piece rather than a comedy show.

Audience participation was a large part of this show – some tasked with managing props while others played the object of his affection. A large portion of the humour came from the nervous titters and the discomfort as Sir John gazed into punters eyes. There were times where it was unclear how he wanted audience members to play along, but it seemed that our gut reactions were the correct ones and the result was always the same.

Lighting and sound / music cues were great in indicating the time of day and also showing us Sir John’s state of mind. These added immensely to this wordless performance and the title cards of salutations were a cute touch.

Cowen gets several hundred brownie points for creating a show that is accessible for a deaf audience and props for his sheer ambition. We know that festival blurbs are written months ahead of actual show creation but it’s a shame that he barely scratched the surface in his exploration of masculinity.

Straight White Knight is on at Bellville until September 23
https://melbournefringe.com.au/event/straight-white-knight/