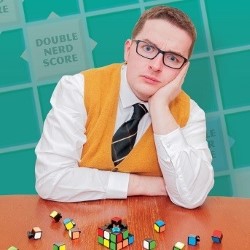 This was a last minute show pick (I got the ticket as the show was starting), so I knew nothing about the show apart from the title. It was certainly a gamble that paid off.

I entered the room to find the audience playing a computer game on the big screen at the front of the room. As each person failed, the controller was passed to the next person in the row making it a communal effort. We almost got to the end and Tom (who created the game) told us we had done the best so far. The game itself will be available to download from Tom’s website after the Fringe has ended (so no sneaky practicing before seeing the show). A devilishly tricky game.

Tom, self proclaimed Performing Nerd, emerged wearing the proper nerd uniform of white long sleeve shirt under a brown sleeveless cardigan with a big 70s tie and a pair of glasses. He gave us an amusingly wonderful hour of pointless yet compelling finger exercises, impressive memory feats and a LOT of Rubik’s Cube based material. One hundred cubes feature in his impressive finale – an amazing feat of improvisation, dexterity and creativity that had everyone’s jaw on the floor.

The primarily youthful and trendy audience really enjoyed this show, as did I. Nerds seem to be popular again and Tom is certainly doing his bit. Highly recommended, even if it’s only so you can try and survive Tom’s game.

Nerd World Problems is on at Gilded Balloon Teviot until August 26
https://tickets.edfringe.com/whats-on/tom-crosbie-nerd-world-problems