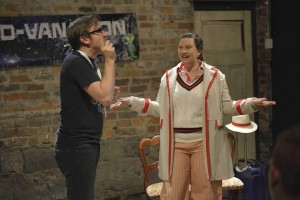 Sometimes, though not often, I see a show that I think someone has written especially to make me happy and this is definitely one. A funny, intelligent and geeky romp through the sexual politics of fandom, bring it on.

Who Are You Supposed To Be? By Keith Gow first debuted at The Edinburgh Fringe in 2013 and Australian actress Jennifer Lusk played the lead Ashley but another person, UK-based Cameron McKewen played Gene Peterson. Like our own Rob Lloyd (and the character they play), Cameron is ‘Con Famous’ in other words he is a minor celebrity in the real life fan convention world, known for his Dr Who blog Blogtor Who. Rob Lloyd has also been involved with a Dr Who podcast, Preachrs Podcast is currently voicing the part of The Doctor in an audio series, has a Vlogcast about pop culture and fan conventions called The Con Artist and gained a reputation around the conventions with his Dr Who themed comedy show Who Me? as well as his striking resemblance to Tenth Doctor David Tennant. The casting of Gene is inspired, although Rob’s personality in real life bears little resemblance to the annoying introvert Gene, the blurring of character / performer adds another delightful layer to the play.

Rob and Jennifer each play their parts beautifully, Jennifer as the strong, plain talking, yet vulnerable Ashley carries the play effortlessly and Rob’s dweeby Gene who grows in insight and warmth as the narrative progresses is a lot of fun as her nemesis cum potential boyfriend. Ashley has travelled to London for a UK holiday that includes a trip to a scifi convention where she has the chance to meet her favourite Dr Who actor Peter Davison. While there she meets Gene and though they don’t really know each other it turns out they have communicated previously through social media, a lovely touch that reflects a lot of modern life relationships. An awkward and bickering friendship develops despite their disagreements about women’s involvement in genre and “non-canonical boobs” (my favourite punny line in the play). There are scenes on each of the four days of the convention and you can tell it is a new day from Gene’s new geek Tshirt of the day. One of the scenes has them on the phone alternately discussing each other with someone else which worked a treat. The themes discussed by the pair go to the heart of all that is good and bad about the modern fan scene and issues discussed passionately on-line. I was also impressed by a beautiful line in the play that referenced something that had happened in a new Dr Who episode of only a week earlier!

Written as a tribute to the 50th Anniversary of Dr Who, it is a very Who heavy script though there are many other geeky references; some as obscure as a character from Babylon 5, others as mainstream as a quote from Toy Story. Intelligent, and funny, this is one of the best Dr. Who tribute plays I’ve seen as Gow explores modern geek culture and relationships with laughs and tenderness. Ten years ago I might’ve thought that this is too niche to fandom for success as a play, but things have changed and nerd culture has grown and seeped into the mainstream and there is a huge audience ready to love this and ‘get’ it. If you enjoy Doctor Who or have been to a fandom convention, you simply must see this play.

Who Are You Supposed to Be? is on at The Owl & The Pussycat (opposite Richmond Station) until October 5th