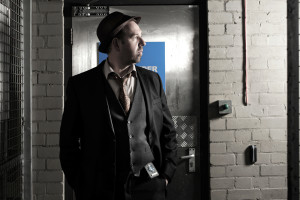 Alfie Moore has been a policeman for 18 years in Scunthorpe. He has been doing stand-up while on a sabbatical from the force and has only a few months left to decide which career he wishes to pursue. This show is about his career and the current state of policing in the UK.

He is not very happy at the creeping privatisation of the police by the current government and the media demonisation of the police’s reputation, and is trying to rouse the public’s feelings toward supporting the police before it is gone. His main weapon is humour, and he wields a sharp comic blade to cut through a lot of the stories about police brutality and corruption over the years. While he may paint a too rosy picture of the police for some to take, he is very funny and tells some tales about his policing days and the people he worked with or encountered. There were a number of local police officers down the back of the audience, and they appeared to be enjoying the show as much as the rest of us.

Alfie talks non-stop for the entire hour and his stories were benefited by an economical use of props (a wig and cut-out of a judge for a couple of scenes). The room is a lecture theatre, with raked rows of seats, with a long bench in front, apart from the front row. This means if the front row was empty it would look very much like the audience was a jury sitting hearing a case – either a deliberate choice of room or a happy co-incidence. The audience interaction consists mostly of Alfie asking us to raise our hands for a couple of questions. There is a little swearing but nothing out of context.

If you’re interested in policing, the law, what this government is doing to the public services or you just like hearing some dirt being spilled about Scunthorpe (and Norfolk), then I can recommend this show heartily. I’d give it four truncheons, but we don’t do ratings here.