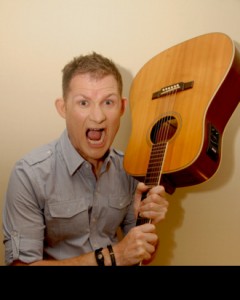 Hailing from Adelaide Darren is a comic/musician who used his hour on the mic to vent his
frustrations at how the way things are in the world. However, it was always going to be tough for
Darren to build an atmosphere with the smallish crowd which was assembled at the Felix Bar in St
Kilda. Rather than having the audience in stitches, he generally had them smiling throughout the
hour long show. Perhaps the size of the crowd made people afraid to laugh out loud?

Over the course of his show, he took everyone through some stand-up, mixed with songs played on
his acoustic guitar, and even played sung to some karaoke tunes. Darren obviously gets inspired by
things that get under his skin. And with the way things are, it was easy for him to fill up one hour
covering items such as his 40th birthday, soy milk, long pauses in reality TV, dead soldiers, and a
review last year’s depressing events.

He may choose to select his audience when he jokes about dead soldiers. It was fine in this room
but it may not go over well if he gigged at Singleton Army Barracks – or if he was unlucky enough to
have a boozed up punter connected in some sort of way.

On a positive note, the crowd favourite was a piece dedicated to Alan Jones which provided an
“educational” insight into this controversial man’s past and his sexual persuasion. In this part, the
use of illustrations to depict the story was both original, clever and piss funny.

He also closed with a creepy tribute to Australia’s Young Talent Time which made everyone’s skin
crawl – in an awkward and comedic way!