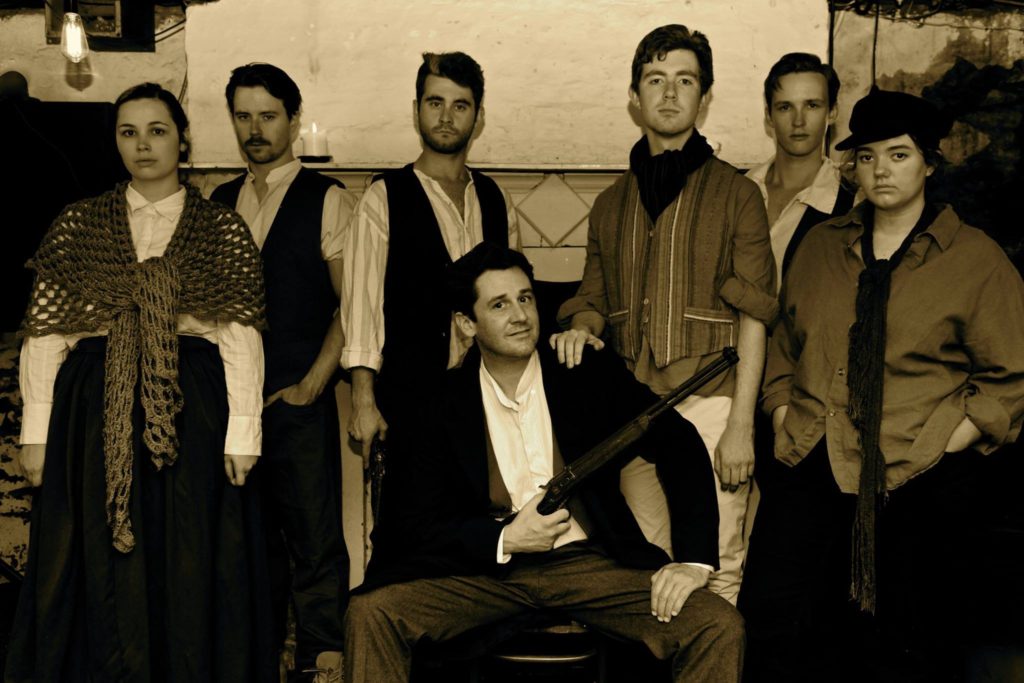 Moonlite is set during a siege, Captain Moonlite and his men are holed up in a homestead and the police are closing in. The story swiftly unfolds as the men tell the tales that they know about Moonlite to the homesteaders and the drama plays out in front of us with the truth peeking out and gradually making itself apparent. The many songs that help tell the tale are toe tappers and provide a friendly welcoming atmosphere, playing as we arrive and as we leave.

We are told that the Grace Darling Hotel was chosen as the venue for the play because Captain Moonlite was said to have drunk there and the basement certainly doesn’t feel like it’s changed much in a hundred and twenty years. White painted bluestone walls, a big open fireplace behind the band and a bar behind the audience, where the actors are hanging out in character as we enter. The space sets up a brilliant atmosphere for this period piece on its own and reminds me a little of the Irish pub musical Once, but with a much better tale to tell.

The play reflects the way history changes in interpretation over time and how, when you are dealing with colourful characters who tell a lot of lies, it’s hard to find the truth. Moonlite gradually unravels the well educated man who came from a wealthy family in New Zealand and had the epithet Captain Moonlite the Bushranger attached to him and then somehow became the legend that the media created. Eventually a delicately outlined melancholy love story is discovered adding a moving dimension to a jolly, if at times dark-edged, romp.

The performers are all brilliant actors and singers, some playing several roles and the audience grows to love them all. Tim Constantine carries off the charismatic Andrew George Scott/Captain Moonlite with a forceful panache. The only quibble was that in hipster Fitzroy it was disappointing that Constantine didn’t have a proper hipster beard, that makes so many young men these days look like 19th century bushrangers (some of the bar staff here could’ve slotted into the play as extras without changing). After all there is a song in the show that celebrates Moonlite’s beard and sadly, the actor’s beard is fake.

Bitten By Productions describes itself as eschewing “non-naturalistic and the abstract in favour of creating a highly entertaining experience for the audience” OMG a theatre company who wants to give the audience an awesome time? These sound like my kind of theatricals. I think the drab, self conscious wankiness of mid 20th C theatre killed mainstream theatre for everyday folks. This show is a warm, welcoming, intelligent theatre experience that is fun for audience and talented performers alike. Certainly one of the best home grown musicals I’ve seen. I hope it goes on to much success.