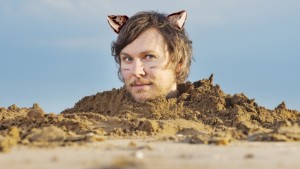 Crawling to the stage in a feline ensemble of tail, chest fur and knee-length dress shorts, The Bedroom Philosopher (Justin Heazlewood) set the tone for the evening ahead – very funny, a little awkward and extremely cat-based. Cat Show explores the world of cats from many angles, taking a look at their history, their propensity to disappear and their place in Heazlewood’s life.

There’s an apt playfulness to Heazlewood’s performance in Cat Show. At times, he’s as fickle and coy as his show’s namesake, toying between snippets of things he could perform. At other times, the cat parallels are more straightforward. One of the best things about Cat Show is the little details that Heazlewood throws in – batting at a pinwheel in frustration, gamboling about with a bit of paper on the floor, getting that butt wiggle just so before pouncing. This is a show with plenty of cat specifics to offer.

Cat Show’s sections of stand-up and storytelling stay on theme. We’re taken through a history of cats and there’s an in-depth look at missing cat poster design. But, of course, it wouldn’t be a Bedroom Philosopher show without music, and there’s a bunch of new songs to be enjoyed here. One detailing the pitfalls of share-housing was particularly strong. In addition to the newer material, the inclusion of old favourite Happy Cow was a treat for long-time fans.

There are sections of the show that are still a little shaky, with the occasional lyrical slip-up and self-deprecating aside. Cat Show is not a polished production, by any means. It is, however, a show that is cohesively scrappy. The costume, the props, the slideshow of a third-grade history project – they all feel right alongside Heazlewood’s lyrics about people and animals whose lives aren’t quite going right.

The Bedroom Philosopher is a stalwart of the Australian comedy scene and Cat Show does not disappoint. It’s a weird show and not without its jankier moments, but there’s an underlying charm that will win over any cat lover.

Cat Show is on at The Coopers Malthouse Bagging Room until April 9
https://www.comedyfestival.com.au/2017/shows/the-bedroom-philosopher-the-cat-show

Pull up your socks, straighten that tie and prepare to sit up straight and speak only when spoken to, The Bedroom Philosopher (aka Justin Heazlewood) is taking us back to high school.

Off the back of some big airtime on triple j with his anti-hipster anthem “So Hungover”, a bundle of live touring, comedy festival shows and CD hits, Beddy Phil returns to the festival with his new show “High School Assembly”.

Upon walking into the Forum theatre, the audience is greeted by the musical stylings of school band “Sex on Toast”. The band are kitted out in the Croxton High School uniform and are, well, really bad. Yep, the high school band to the tee. This perfectly cringeworthy cover band sets the tone for the nights performance.

The familiar stiff high school principal leads proceedings from his lectern, introducing the barrage of high school stereotypes. The drama kids, the class clown, participation certificates and Rock Estedford performances all feature. The performances are spot on, so spot on it will have you flashing-back to your own school experience so fast, your mortarboard will spin.

Fan’s expecting to see The Bedroom Philosopher’s own musical comedy will be disappointed, as this is well and truly a ensemble cast play. Beddy Phil does appear as a “special guest of the school” to perform an educational (and unfortunately, not very funny) song but for most of the night, assumes the role of a hand-full of characters, accompanied by his sizeable cast.

There’s a heap of variety in the show, and there are some gems in there, like an perfectly awkward love ode and hilariously inappropriate Rock Estedford entry, but a lot of the acts fell well and truly flat.

The show achieves the feel of a high school assembly remarkably, but that’s just the problem. High School Assembly’s were not fun or entertaining. That’s not to say the show isn’t entertaining, but it could be so much better that it was.

The underlining problem with this show is that it doesn’t go far enough with it’s characters, less subtlety and more depth could have gone a long way.

An A for effort, but needs to apply himself more.