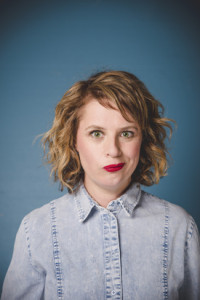 People I barely know often ask me to recommend something for them to see at the beginning of the Festival and one of the names I often say is Anne Edmonds, because how can anyone not love Anne? Then tonight she began with the filthiest jokes about drinking cum I’ve ever heard her do and as I laughed like a drain I wondered what those acquaintances who took my recommendation thought. I also wondered if this mind boggling filth up the top is there to weed out the wusses. There were no walk outs the night I was there, everyone was too busy being doubled up with laughter.

Anne reminds me of a dotty, feminist Aunty who says the most outrageously hilarious things. She talks about her fascination with torture, despair and humiliation and yet remains so cheerful and congenial that laughing about the weird stuff doesn’t seem so weird and the show rolls merrily along. Even when she is cracking jokes about people falling and hurting themselves. She has a very charming Australian turn of phrase that is very endearing which allows her to bring high concepts down to earth and make them easily digestible for all.  Anne’s also great at wacky character voices (and faces) like unattractive Bernadette and the vain cancer patient who does duckfaced selfies.

There are a couple of times when Anne pops over the edge of taste and the audience has trouble going with her. It’s as if she’s constantly pushing us to see how far she can take things, but she doesn’t let that affect her performance, which is impressive. When she’s not skewering perfectly the way that bitches psychologically bully others and the vanity of people on Facebook, she’s surprising us by becoming somewhat political, which she handles magnificently, without the slightest hint of earnestness. Perhaps my favourite routine of the festival so far is her very clever gear about being annoyed by white South Africans. She pitches it perfectly on a very sharp edge. It’s a little frightening but so funny.

There’s no appearance of the banjo in That’s Eddotainment, which was a bit sad for a fan of four stringed instruments like me, but like Steve Martin, she doesn’t need it to entertain the audience. Last year I saw her warm up a very cold Marc Maron audience at The Palais in Melbourne with great skill and she had them all laughing and applauding with joy by the end. She reminds me of watching a young Judith Lucy or Sarah Millican, I can see great longevity in her comedy career. She’s a Star. Go and see her now, while she’s still in a small room.